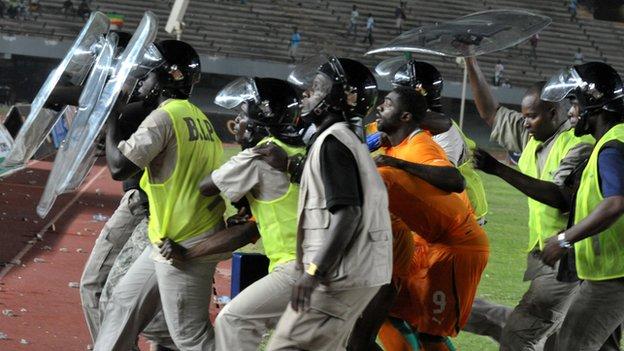 Ivory Coast's Yaya Toure believes the ban on Senegal playing in Dakar could prove decisive during the teams' World Cup play-off in Morocco on Saturday.

The Elephants lead 3-1 from last month's first leg in Abidjan.

"The positive thing for us is that we will play on a different pitch in a different country - playing without fans is difficult," Toure told the BBC.

Senegal are barred from playing in Dakar after a riot during a Nations Cup qualifier against the Ivorians in 2012.

Although the ban only applies to the main national Leopold Senghor Stadium in the capital, Senegal does not have any other Fifa-approved venues - so prompting their move to Casablanca.

The Teranga Lions, who reached the quarter-finals of the 2002 World Cup, looked set for elimination until Papiss Demba Cisse scored deep into stoppage time in the first leg for a potentially priceless goal.

They can qualify for Brazil 2014 by beating the Ivorians 2-0 this weekend, whereas a 4-0 scoreline would have been needed before the late strike.

Cisse, who has scored twice in three games against Africa's highest-ranked side, believes that knocking out Didier Drogba, Toure and company will be very difficult.

Yet Alain Giresse's side can take some comfort from the fact that Ivorians Arthur Boka and Siake Tiene will miss out through injury, while Cisse's Newcastle United colleague Cheick Tiote is suspended.

"It's possible but in Africa, this team is not easy - it's a big team," Cisse told BBC Sport. "I know we will work hard for this game - and then maybe, maybe (we might qualify)."

In the opening leg on 12 October, Ivory Coast raced to a two-goal lead within a quarter of an hour but Cisse says his side have learnt from their mistakes.

"I think this time we will be ready before the game, because I don't think we were ready in the first game - we did not start well," he said. "My team has woken up now and we will start well.

"This game is hard but I am confident."

As is Toure himself.

"We have a good advantage, having won 3-1 in the first leg," he explained. "But we know the second leg will be very tough.

Having never qualified for a World Cup prior to Germany 2006, Ivory Coast are seeking their third straight appearance at the finals.