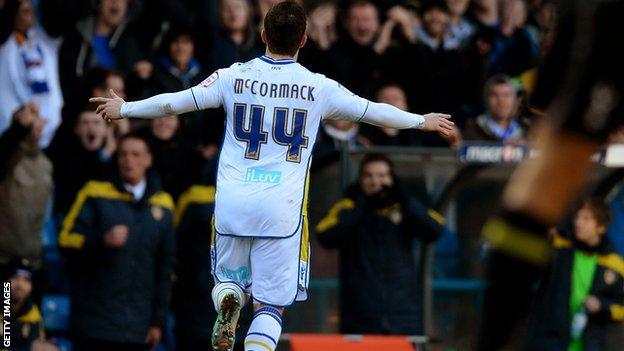 The former Real Madrid assistant manager saw goalkeeper Jason Steele sent off in the first half, before Ross McCormack put Leeds ahead.

The win moved Brian McDermott's side into the Championship play-off places.

Ex-Real Madrid defender Karanka, who also spent three years as Jose Mourinho's number two at the Bernabeu, described his arrival at Middlesbrough as a new era.

Win or bust for Leeds

But hopes of a winning start and just a third Middlesbrough victory in 14 outings were dealt a blow when McCormack netted his ninth goal in seven matches.

The 27-year-old pounced on a header across goal by team-mate Tom Lees to head home from close range for his 13th goal of the season.

The Scot had been frustrated when two penalty appeals were turned down, but his goal and the decision by referee Philip Gibbs to dismiss Steele gave Boro an uphill challenge.

Boro are yet to beat a side above them in the league this season, but rallied in the second period and levelled when Carayol swept past Paddy Kenny after a defence-splitting pass by Albert Adomah.

Leutwiler pulled off a superb diving save from Alex Mowatt but could not deny Pearce minutes later when he leapt to head home captain Rudolph Austin's cross.

Mowatt and Austin both went close late on, as Boro were consigned to their third consecutive away defeat.

"Sometimes you are better playing against 11 men. We have found that in the past. It is psychologically harder against 10.

"We couldn't get that third goal but the result was the most important thing.

"It's good to be in the top six but I would rather be even higher. There is much more to come from the team."

"It would have been better if we had won, but I am happy because we played very well in the second half when we were down to 10 players.

"I have had just 10 days with the players but they have shown a good attitude and with that we can build.

"Even so, there may be changes for the next game, depending on what I see on the training ground."