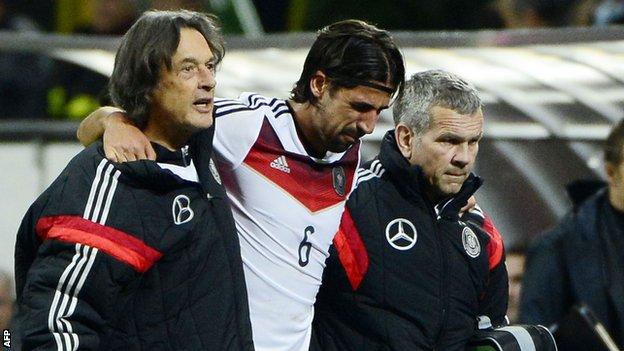 Real Madrid midfielder Sami Khedira has been ruled out for up to six months after suffering a knee injury.

The 26-year-old tore a cruciate ligament during Germany's 1-1 friendly draw against Italy in Milan on Friday.

Khedira, who has played for his country 44 times, will now have surgery.

"This is a bitter setback for Sami," said manager Joachim Low. "But he always thinks positively and that is why I am optimistic he will be ready and fit when the World Cup starts."

Khedira suffered the injury in a second-half tackle on Italy midfielder Andrea Pirlo.

Germany are among the favourites for next summer's World Cup in Brazil after qualifying with nine wins from their 10 matches.

Low's side continue their preparations for the tournament with a friendly international against England at Wembley on Tuesday.

Khedira started his career at Stuttgart and moved to the Bernabeu on a five-year deal for an undisclosed fee in July 2010 after starring in the 2010 World Cup.