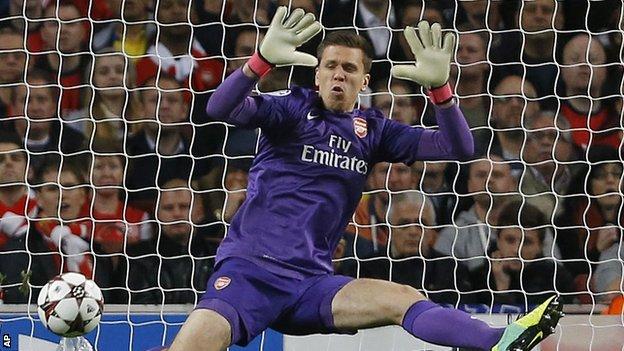 Arsenal goalkeeper Wojciech Szczesny has signed a new contract which the club describe as "long-term".

The Poland international joined the Premier League leaders from hometown club Legia Warsaw in 2006 and made his first-team debut in September 2009.

Preferred to his fellow Pole Lukasz Fabianski, the 23-year-old has made 123 appearances for the Gunners.

Wojciech Szczesny is the son of former Poland international goalkeeper Maciej Szczesny, who was once sent off for punching Roberto Mancini in the face.

"It was in the European Cup Winners' Cup quarter-final in 1991," Szczesny told the Guardian in February 2011.

"If you look on YouTube you will have confirmation. It's a very clear punch. He just went straight through him."

Arsenal did not reveal the length of the deal signed by Szczesny, who said the club was "like my family".

Szczesny, whose previous contract was agreed in 2010, said: "I'm so proud to be an Arsenal player and am looking forward to helping our club towards success in the years to come."

As well as impressing for Arsenal this season, he played against England for Poland, whom he has represented 15 times, in October's World Cup qualifier at Wembley.

Gunners manager Arsene Wenger said he was "very pleased", adding: "I have always believed he is an extremely talented player, with excellent reflexes and good mental strength.

"He continues to grow and improve all the time too, so he has the potential to be even better.

"He can be an important part of Arsenal Football Club for many years to come."