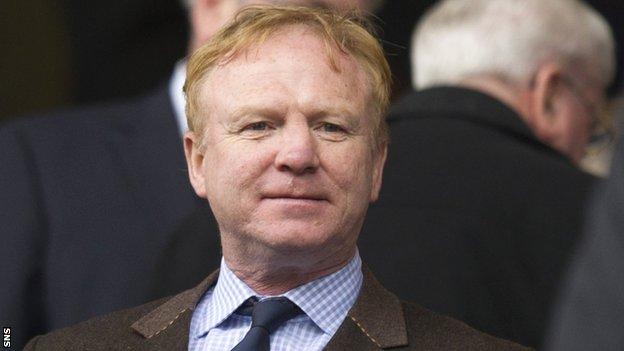 Alex McLeish hopes his next managerial job will be in England or overseas but has not ruled out returning to his Scottish homeland.

And he told BBC Scotland: "At the moment, I see my future in England or possibly abroad.

"I've got unfinished business in England and I might want to go abroad for another different challenge."

McLeish's last managerial job was at earlier this year, after spells at Birmingham City and Aston Villa.

He won the League Cup with City in 2011, adding to the seven trophies he won at Ibrox.

The vacancy at Inverness has been created by one of McLeish's former clubs.

"Terry's done really well up at Inverness," said McLeish. "The guy that takes over has got a big job ahead of him to beat that or even just to keep them where they are.

"I think he'll bring something to Hibs. He'll bring massive passion to the supporters. The supporters like to see a certain type of football at Hibs, but first and foremost they would like to see the team winning."

McLeish says is looking for "another half-decent project" lasting at least two years where he can "build something".

"At the moment, I don't seem to be getting quoted in the higher end of the bookies' odds in the jobs in England, so maybe I've got to spread my wings and re-invent myself," he admitted.

"Hopefully, the next one could be very, very important for me."

McLeish said he would "never rule out coming back to Scotland", adding: "You always feel like you've got something to prove. I've had a lot of success in the game and I feel that there's more success in me."

The former Scotland manager has been impressed by the impact of former Aberdeen and international team-mate Gordon Strachan as national boss.

"Gordon's definitely brought a little bit of spirit to the team," added McLeish.

"The next thing he'll be wanting is to get that real passion back at Hampden, where Gordon starred in the past and when we got to World Cup finals and European Championships by not only stopping teams playing but getting right in their faces."