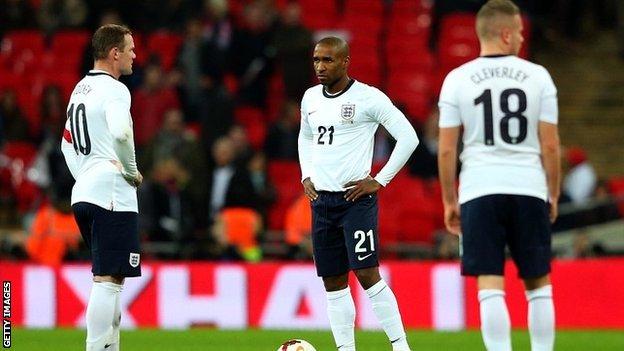 Jermain Defoe admits his chances of making England's World Cup squad will diminish if he keeps being overlooked by Tottenham manager Andre Villas-Boas.

The striker came on to earn his 55th cap in England's 2-0 loss to Chile on Friday, but has made only one Premier League start for Spurs this season.

"Getting into a World Cup squad is based on merit and you have to play for your club," said the 31-year-old.

"As a forward, if you are not getting the chances, it will be difficult."

Defoe has been in good goalscoring form in the Europa League and League Cup this season, grabbing nine goals in seven games.

But he is yet to make his mark in the Premier League this term, with Villas-Boas preferring Roberto Soldado, and is concerned that with competition fierce to make the England squad in Brazil, he could miss out.

The strikers in Roy Hodgson's most recent squad were Defoe, Manchester United's Wayne Rooney and Southampton's Jay Rodriguez, while Liverpool's Daniel Sturridge and Southampton's Rickie Lambert withdrew because of injury.

Defoe, whose 19 England goals include the winner against Slovenia at the 2010 World Cup in South Africa, also faces competition from Manchester United's Danny Welbeck, Arsenal's Theo Walcott and West Ham's Andy Carroll, who are all injured.

He added: "Frank Lampard got it right when he said the other day that everyone is fighting [for places].

"It's important that everyone goes back to their clubs and plays games to try to impress the manager.

"It's a long way to go before the World Cup. There is a lot of football to be played and we will see what happens. You never know, I might play every game from now on."