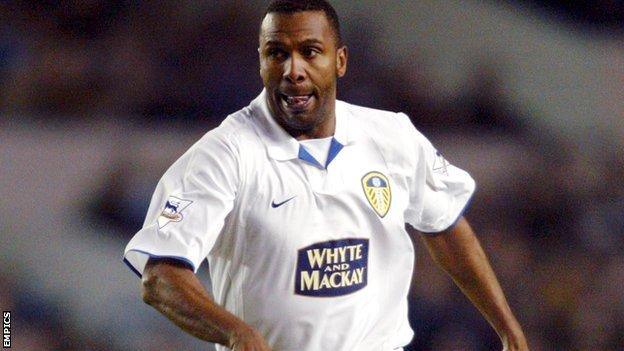 The BBC has learned Radebe, 44, is part of a group involving ex-Leeds director Adam Pearson looking to purchase a majority stake in the club for £7m.

GFH said in a statement: "We are watching with a mixture of bemusement and interest the reports suggesting any credible takeover bid has been made.

"No serious approach has been made by any members reportedly concerned."

In 2010, Radebe told BBC Radio Leeds: "I want to give back to what the game has given me.

"Much as I would like to be on the field of play again, my passion lies with the development of the game at grass roots level in South Africa or coming to join Leeds."

Leeds United Supporters' Trust chairman Gary Cooper told BBC Sport that a takeover by the club with Radebe involved would be welcomed by supporters.

"Obviously we, and all Leeds United fans, need more detail. But it has got to be exciting because of the involvement of Lucas Radebe," he said.

"Leeds United winning promotion back into the Premier League with a group involving Lucas, who is loved by all Leeds United supporters, would be an ideal scenario.

"He knows what it takes to be successful at Leeds United, because he was part of those great European nights in the late 1990s and early 2000s."

Brian McDermott's side are currently eighth in the Championship, one point outside the play-off places.