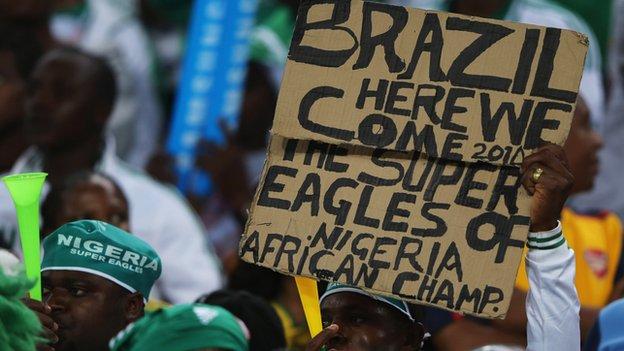 Continental champions Nigeria became the first African side to qualify for the 2014 World Cup after beating Ethiopia 2-0 in Calabar on Saturday.

Goals from Victor Moses and Victor Obinna sealed a comfortable victory and a 4-1 aggregate win.

Moses converted from the penalty spot after Aynalem Hailu was harshly adjudged to have handled in the area.

Substitute Obinna cemented a place in Brazil when his free-kick deceived Sisay Bancha in the Ethiopia goal.

Nigeria are through to their fifth finals, having previously qualified in 1994, 1998, 2002 and 2010, and they will travel to Brazil with their eye on reaching the knock-out stages for the first time since France 1998.

Stephen Keshi, who captained Nigeria at their first World Cup appearance, will now coach his nation at the World Cup following a triumphant 2013.

Having won the Africa Cup of Nations in February, the former defender - overlooked for Fifa's Coach of the Year award - masterminded an unbeaten World Cup qualifying campaign.

The Super Eagles conceded only four goals in their eight World Cup qualifiers and they were rarely threatened in Calabar where Ethiopia struggled to make any impact on Vincent Enyeama's goal.

After Bancha pushed out an early effort from Emmanuel Emenike, whose second-half goals in Addis Ababa had turned the tide Nigeria's way, the game turned on a refereeing decision.

This is one of the greatest achievements in my career

Gambian official Bakary Papa Gassama ruled that defender Aynalem Hailu had deliberately handled a speculative strike even though the ball ricocheted onto his arm a split-second after hitting his midriff.

Moses, who had scored two penalties against Ethiopia at this year's Nations Cup, duly netted a third as he coolly sent Bancha the wrong way.

The goal gave Nigeria a two-goal cushion, which Moses almost extended with a low drive from distance before Ideye Brown missed a better chance when heading wide from just six yards with the goal at his mercy.

Ogenyi Onazi then forced Bancha into another smart save with a well-struck effort as the first half drew to a close.

As the weather turned from bright sunshine to grey clouds, little could dampen the mood of euphoria filling the UJ Esuene Stadium in Calabar.

The lack of action prompted a surge of Mexican waves until Obinna flighted home a 25-yard free-kick which somehow deceived Bancha.

The goal killed off a tie that was already on its last legs, but Ethiopia coach Sewnet Bishaw can reflect with satisfaction on a campaign that defied all expectations.

The Walya Antelopes' previous ranking had been so low they started World Cup qualification in Africa's preliminary stage, beating Somalia, prior to stunning South Africa in the group stage to reach the play-offs.

Yet Saturday's win was all about Nigeria, who will travel to Brazil with the expectations of its 165 million inhabitants and the hopes of a continent.