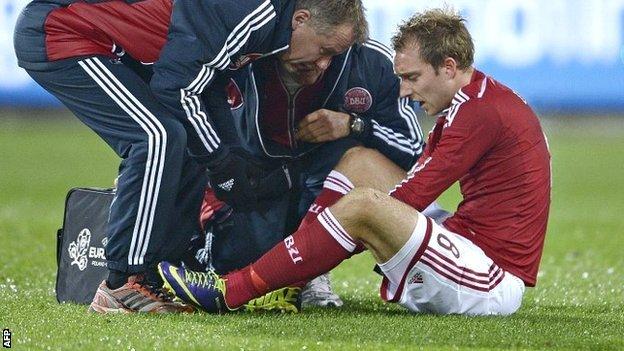 Tottenham midfielder Christian Eriksen could be out for up to four weeks after suffering an ankle injury while playing for Denmark.

Eriksen, 21, was substituted during the 2-1 win over Norway on Friday following a tackle by Vegard Forren.

There were fears the Dane had ruptured ankle ligaments, but scans revealed he had only suffered a sprain.

But Eriksen could be back for the home game against Liverpool on 15 December.

A Tottenham statement read: "Following an MRI scan on Monday it has been determined that Christian Eriksen suffered a sprain of the lateral ankle ligaments playing for Denmark against Norway on Friday.

"The scan showed no sign of ruptured ligaments which will result in a shorter period of recovery for the attacking midfielder."

Spurs signed Eriksen from Ajax for £11.5m in the summer. He was man of the match on his debut in a 2-0 win over Norwich and he scored in the following fixture against Tromso in the Europa League. Since then he has struggled to for a place in the starting XI, with manager Andre Villas-Boas preferring Lewis Holtby.