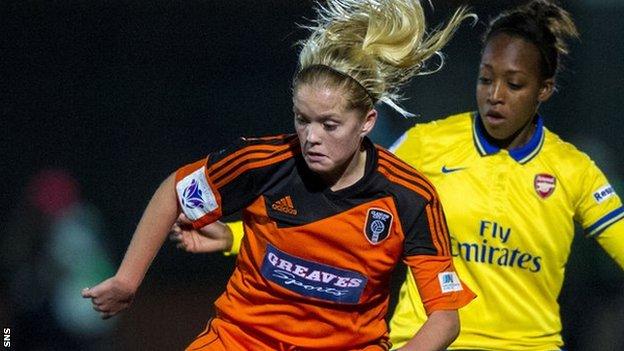 Republic of Ireland striker Denise O'Sullivan has agreed a new contract to remain with Glasgow City.

The Scottish champions made the announcement ahead of their Scottish Cup final against Hibernian.

Glasgow signed O'Sullivan at the start of the season after the 19-year-old left Cork.

City have in recent seasons lost players to German and English football but will hope to retain the squad that reached the Champions League last 16.

Wales midfielder Jess Fishlock told BBC Scotland last week that she had enjoyed herself in Glasgow but would only consider her future at the end of the season.

Scotland midfielder Kim Little is understood to be undecided about her future at Arsenal.

However, the former Hibs 23-year-old almost certainly will not return to the Scottish Women's Premier League at this stage of her career.

Germany, USA and other clubs in England are more likely destinations should she decide to leave the side who lost their league title to Liverpool this season but who defeated Glasgow to again reach the Champions League quarter-finals.