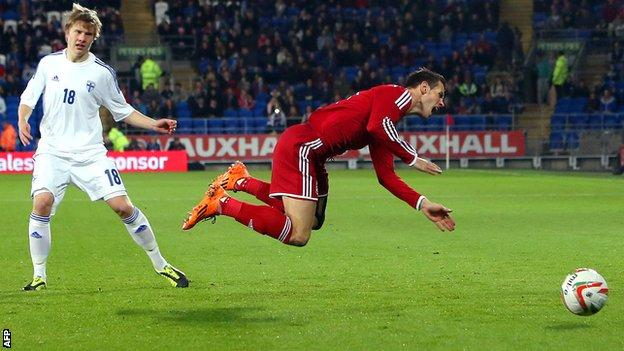 The match was billed as a friendly but had a competitive edge throughout, with Finland often doubling up on Bale.

"He is going to get kicked, pushed and bullied but... he has the character to deal with it," said Coleman, who saw his side concede a late equaliser.

"He hasn't got a choice as he is such a good and dangerous player.

As a team ourselves we can be a little bit more nasty. I was impressed with Finland. They had good energy and good football players

"Gareth knows before he walks onto the pitch that in that 90 minutes there will be someone who wants to leave something on him.

"But he has got to take that as a compliment as well and I am sure he does, although it may be a painful compliment."

Bale, the world's most expensive player after his £85m move from Tottenham to Real Madrid, played the full 90 minutes at Cardiff City Stadium, the first time he has done so for his country since his move to the Bernabeu.

But the 24-year-old did not have the easiest of nights and during the opening exchanges Jere Uronen managed to catch Bale late twice, leaving the forward needing treatment to his ankle.

"I said at half-time, 'listen, this team is not here for a friendly'. They were honest. I am not complaining, that's football," added Coleman.

"As a team ourselves we can be a little bit more nasty. I was impressed with Finland. They had good energy and good football players."

Coleman had looked set to celebrate his with a win after Andy King gave Wales a 58th-minute lead from Hal Robson-Kanu's cross.

But Finland, who had gone close when Celtic striker Teemu Pukki struck the woodwork in the first half, found a late equaliser as Riku Riski levelled with a cool finish at the death after Wales switched off.

"We knew they were good at counter-attacking, had good pace and they move the ball well. They were aggressive attacking and we knew that and worked on it," added Coleman.

"But we just slipped up right at the end and it has cost us a victory that up until then we had worked hard to get, so we are disappointed."