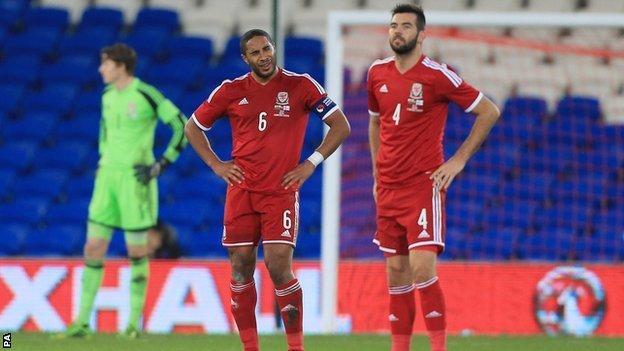 Last week saw Chris Coleman which will see him lead Wales into the qualifying campaign for the 2016 European Championship.

Given that, for the first time, 24 teams - expanded from 16 - will compete in the finals in France, this is without doubt the best opportunity we are going to have to reach a major tournament.

However, if we are even going to come close to competing for qualification places we will have to perform better than

It was a big blow for everybody when news broke that both Aaron Ramsey and James Collins had pulled out of the squad just hours before kick-off.

Nonetheless, it was still a strong line-up for Wales, one that really should be beating the likes of Finland at home.

I was so disappointed with the first-half performance. Everything we did well against Macedonia and Belgium, we didn't do against Mixu Paatelainen's men.

We didn't play with any real tempo, had a great lack of urgency in our passing, and we certainly didn't close down as a team and work as one unit.

As we proved in our last two 2014 World Cup qualifying group games in October, we are a very good team when we press and pass with a purpose, but when we let the standard drop we can become a very average side, as we were for periods of the game on Saturday.

We only mustered one effort on goal in the opening 45 minutes, which as the home side isn't good enough.

Finland passed the ball better, were quicker and were more intelligent with their movement in the final third, and were unlucky not to go ahead when their forward Teemu Pukki, who was lively throughout, struck a right-footed shot against the post.

I thought their midfield three got the better of Joe Allen, Joe Ledley and Andy King in the first half. Nevertheless, the midfield trio improved in the second half, asserting the dominance they can provide.

Chris must have had words at half-time as Wales were much improved after the break. There was greater urgency in our play, with the quality of our passing improving in the process.

We closed Finland's players with a higher intensity and much further up the field, resulting in an increasing amount of possession in the opposition third.

Gareth Bale showed glimpses of magic in the second half, cutting in from the right-hand side and gliding past defenders only to see his fierce strikes fly straight at Lukas Hradecky in the Finnish goal.

Allen grew into the game in the second half and this provided the platform for Wales to increasingly dominate proceedings.

He broke the play up in the middle of the park, winning possession back early and setting up attacking play with early passes. One such instance of his effective play led to the opening goal.

There was good interplay between Hal Robson-Kanu and Ledley, and it was a peach of a cross from Robson-Kanu that saw King score his second goal for Wales.

There should be a limit to how many substitutes you can use in a friendly as we saw far too many in the second half, making it difficult for either side to gain some momentum - and it may have cost Wales in the end.

With a minute to go, Chris decided to take Allen off and bring on Owain Tudur Jones. It's great for Owain to get another cap, but I don't think Finland would have scored the equaliser if Allen was still on the field.

I believe he would have cut out the long through-ball between Sam Ricketts and Ben Davies before it had even reached the goalscorer Riku Riski, as he had done for the duration of the second half.

It was a poor goal to concede right at the death. There was no pressure on the man on the ball and he had all the time in the world to thread the ball through to Riski, who found far too much space between Ricketts and Davies.

Should Davies have pulled Riski down before he reached the box and risk taking a red card? Probably not, especially in a friendly, as we need all our best players available for the forthcoming campaign if we are going to challenge for qualification.

All in all it was a disappointing night, and it highlights the fact that we have to be consistently at our best if we are going to have a chance of qualifying for France 2016.