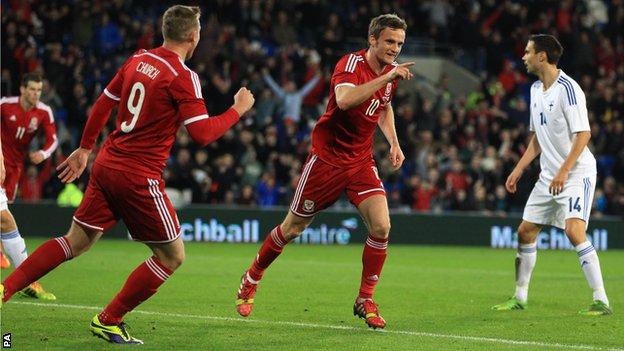 Wales captain Ashley Williams believes the performance of Andy King in the shows the growing strength of the squad.

King, who plays for Championship side Leicester City, started the friendly at Cardiff City Stadium in place of injured Arsenal star Aaron Ramsey.

Until Riku Riski's late equaliser for Finland, King's goal had seemed set to give Wales a morale-boosting win.

"He played well again, he did well out in Belgium as well," Williams said.

"It's nice that the people that are coming in are really playing well and staking a claim to start matches.

Everyone was pretty down, it feels like a defeat... we need to start games better

"Every time we come together... there's a lot of caps on the board now and it's good experience for everyone.

"If we're going to do anything we need our strongest starting XI out... but I think everyone that came in did a great job."

Wales finished fifth out of six teams in their 2014 World Cup qualifying pool, but Williams believes they will be better prepared to try and qualify for the 2016 European Championship in France.

The draw has yet to be made - and Wales will again face an uphill task as they will be one of the group of fourth seeds - but with 24 teams rather than 16 qualifying for the finals, Williams knows Wales have their best chance in a long while.

"We're trying to stay focused on that [the next qualifying campaign] from this camp and doing a lot of work to stay on track to where we want to be," Williams said.

"A lot of boys are now getting a lot of caps underneath them and it's all experience. Even [against Finland] it's an experience for us and we'll learn from it hopefully and go again."

However, Williams admits that conceding an equaliser to Finland in time added left him with a bitter taste in his mouth.

"We were so close to the win and when you don't get it it's disappointing," Williams added.

"Everyone was pretty down, it feels like a defeat.

"We need to start games better, I don't think we started at the tempo we wanted to play at but we got there in the end and I think we performed pretty well as a team.

"Finland are a good team as well, they had a decent qualifying campaign. It was a tough test."