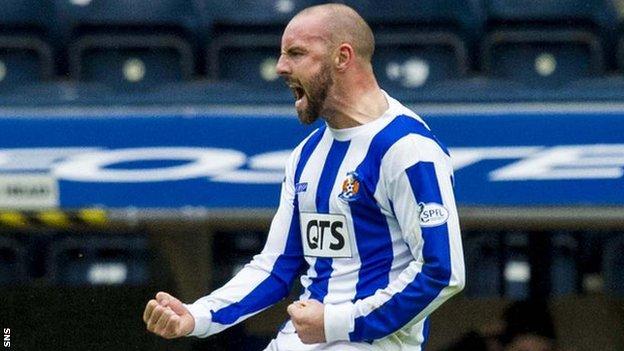 Kilmarnock's Kris Boyd has vowed to prove his worth at international level after being recalled to the Scotland squad along with Stuart Amstrong.

Boyd and the Dundee United midfielder have been drafted in after Grant Hanley, Steven Fletcher and Charlie Mulgrew returned to their clubs.

The 30-year-old striker last played for Scotland in 2010.

"Hopefully I can get involved against Norway and show what I am still capable of at the highest level," he said.

"I never gave up hope of playing for my country again and I am grateful to Gordon Strachan for giving me that chance.

"I have always felt I can make a contribution at international level and knew that, if I kept working hard, my chance would come again."

Boyd made himself unavailable for Scotland in October 2008 after falling out with then-manager George Burley.

He was recalled by Burley's successor, Craig Levein, in February 2010, but his struggles at club level - his scoring touch deserted him at Middlesbrough, Nottingham Forest, Eskisehirspor or Portland Timbers - led to him losing his place in the national set-up.

But he has scored six times in 12 appearances for Kilmarnock this season, despite the Ayrshire side sitting second bottom of the Premiership table.

Boyd's joy meant disappointment for Wolves striker Leigh Griffiths, who was left out of manager Strachan's original squad ahead of Friday's 0-0 draw with USA despite 10 goals for the League One side this season.

"Gutted with three call offs; I ain't got called up to the squad," the 23-year-old said on Twitter. "Just need to keep head down and work even harder."

Fletcher was allowed to return to his club ahead of Tuesday's friendly after making his own return to the Scotland starting line-up against USA following a spell on the sidelines through injury.

With Blackburn Rovers' Jordan Rhodes having withdrawn through injury ahead of Friday's game, that left manager Gordon Strachan with only Everton's Steven Naismith and Leeds United's Ross McCormack as striking options.

Strachan, for whom Boyd played at Middlesbrough, told the Scottish FA website: "Kris has always said he was determined to return to the international squad.

"Now he has that opportunity again and I am delighted for him.

"He is a terrific professional who works hard on his game. Having spoken to a lot of people about him, they are of the same opinion as me - that Kris is an asset to any squad with his goalscoring capabilities.

"He is playing regularly again at Kilmarnock and that sharpness made him a natural choice when looking for a striker to replace Steven."

Celtic midfielder Mulgrew and Blackburn defender Hanley both picked up injuries against the USA.

Scotland Under-21 captain Armstrong was also called up to Strachan's squad following injuries ahead of their June win over Croatia in Zagreb, but the 21-year-old has yet to win a full cap.