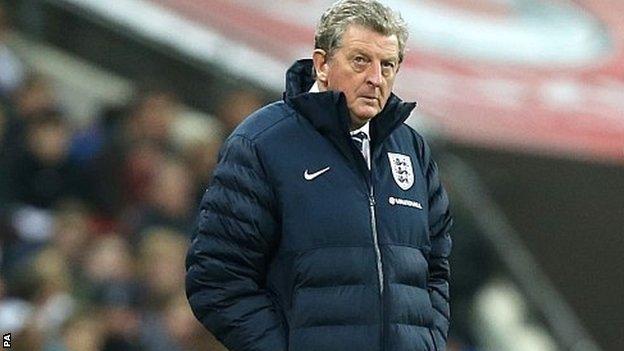 England boss Roy Hodgson has revealed that Franz Beckenbauer may have been the key factor in him missing out on becoming Germany's first foreign coach.

But he said former Germany boss Beckenbauer felt the Englishman would have blocked upcoming German coaches.

"It was an honour when Braun called me," Hodgson told Germany's Bild am Sonntag newspaper.

"I was on the president's wish-list. He would have had problems convincing people to accept a foreign coach though.

"At the time, my friend Franz Beckenbauer pointed out that a foreign coach of the Germany national team would not have helped the German coaching programme - the up-and-coming coaches."

He was manager of Blackburn at the time the job was offered to him.

The DFB decided on Erich Ribbeck to replace Berti Vogts, who resigned following Germany's quarter-final elimination to Croatia at the 1998 World Cup.

Ribbeck, 61 when appointed, did not match Beckenbauer's "up-and-coming" template either, though since his departure two years later, the DFB have appointed young German coaches in Rudi Voller (40 at the time), Jurgen Klinsmann (39) and Joachim Low (46).

Hodgson was sacked by Blackburn in November 1998 and returned for a second spell at Inter Milan, where he was named technical director.