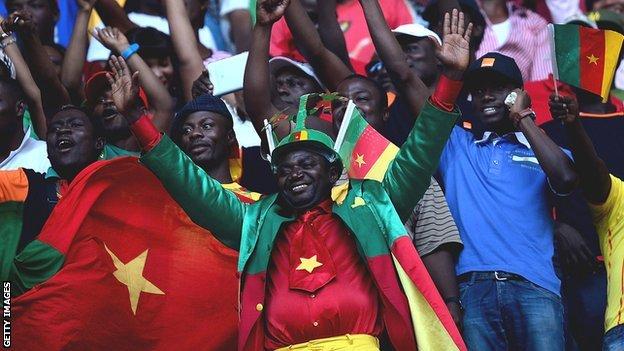 Cameroon booked their place at the 2014 World Cup after blowing Tunisia away in a convincing 4-1 victory in Yaounde.

After last month's first leg in Rades ended goalless, Pierre Webo gave the hosts the perfect start when capitalising on a defensive mix-up.

Benjamin Moukandjo doubled the lead in the first half, before Tunisia substitute Ahmed Akaichi halved the deficit with a fine volley.

After making an unbeaten debut at the tournament in 1982, the Indomitable Lions have qualified for all but one World Cup since reaching the quarter-finals in 1990.

They failed to qualify for Germany 2006 when a missed Pierre Wome penalty in stoppage time of their final World Cup qualifier led to rioting in Yaounde.

There were very different scenes in the Cameroonian city on Sunday, as Volke Finke's side negotiated a test against four-time World Cup qualifiers Tunisia with relative ease.

Their progress was significantly boosted by hesitation in the Carthage Eagles' defence after just four minutes, allowing veteran Webo to steal in and sweep a left-footed strike past Moez Ben Cherifia.

While the Tunisian goalkeeper may have had little chance with that strike, he should have done more to prevent the lively Moukandjo from doubling the hosts' lead on the half-hour.

The Nancy player showed good awareness to tip-toe his way through three half-hearted challenges before steering the ball home from the edge of the area, with Ben Cherifia seemingly wrong-footed.

The visitors, who have now failed to qualify for the last two World Cups, had an immediate chance to respond only for an unmarked Syan Ben Youssef to head a Wissem Ben Yahia free-kick over when well placed.

Tunisia coach Ruud Krol, who had been drafted in at short notice ahead of the first leg after previous coach Nabil Maaloul resigned, brought on Ahmed Akaichi and Fabien Camus at half-time.

The changes paid instant dividends when just five minutes later, the Tunisia-based Akaichi displayed considerable composure as he drilled a left-footed volley past Charles Itandje from the edge of the D.

Trailing 2-1, the visitors knew another strike would take them through on away goals but it was Cameroon who scored the all-important next goal.

Just minutes after a previous corner had been inadvertently turned against the bar by a Tunisian defender, Jean Makoun profited from slack defending once again as he powered home a header from close range.

Moukandjo could and should have made it four just moments later, but he was denied by a mix of poor finishing and a decent Ben Cherifia save.

Having had a hand in the third goal, substitute Eric Choupo-Moting helped with the fourth as his low strike was tipped against the post - so giving Makoun the chance to turn inside two men before gleefully firing into an empty net as he sent his nation to the World Cup.

The celebrations across Cameroon could finally begin in earnest, with captain Samuel Eto'o, 32, leading the way despite a quiet 90 minutes.

One of the greatest African footballers of all time will now travel to Brazil for what may be his last World Cup and a final opportunity to emulate the feats of his childhood hero Roger Milla.

The then 38-year-old lit up the 1990 World Cup as Cameroon reached the last eight and the challenge for Eto'o, Finke and the rest is to reach the knock-out stages for the first time since that unforgettable run.