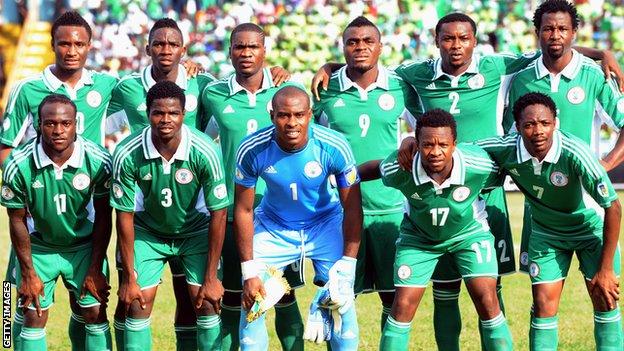 The Super Eagles became the first African side to qualify for the 2014 World Cup after beating Ethiopia 2-0 on Saturday for a 4-1 aggregate victory.

Enyeama believes Nigeria can become the first African team to not only reach the semi-finals but even win the final.

"[Are we going] to make an impression at the World Cup? No, we can actually win it," the goalkeeper told BBC Sport.

"I wouldn't be surprised if Nigeria win the World Cup one day - maybe with me. It's just a matter of time and moment. Everything is possible. Impossible is nothing."

The veteran international continued his fine run in goal by keeping a clean sheet against the Ethiopians to add to his seven successive clean sheets with French side Lille.

But his confidence about a Nigerian triumph in Brazil next year flies in the face of both history and form.

The two-time African champions have not won a match at the World Cup since beating Bulgaria in 1998, which is the last time the Super Eagles made it to the knock-out stages.

In both 2002 and 2010 Nigeria exited the tournament disappointingly early. Nonetheless, Enyeama says his confidence stems from his strong faith in Christianity.

"I believe in God, I believe in the Bible, which says he chooses who he chooses," the 31-year-old explained. "What if he [God] chooses Nigeria. I don't believe in statistics and you can never rule us out."

In the long history of the World Cup, only three African teams have ever reached the quarter-finals: Cameroon in 1990, Senegal in 2002 and Ghana in 2010.

The Gambian awarded a harsh penalty against Ethiopia in the first half, which allowed Victor Moses to set Nigeria on the road to Brazil.

"The referee won the game for Nigeria," he complained. "It is the referee because he denied us two penalties and gave them a soft penalty. These were not fair decisions.

"My players are young and most of them play locally but we will continue to work hard so as to be one of the best teams in Africa."

While Ethiopia will go home to build for the future, Nigeria are already planning for Brazil and face 2006 world champions Italy in a friendly in London on Monday night.

It will be Nigeria coach Stephen Keshi's first friendly against European opposition since he took charge in November 2011, with the four-time world champions seen as ideal preparation ahead of the World Cup.