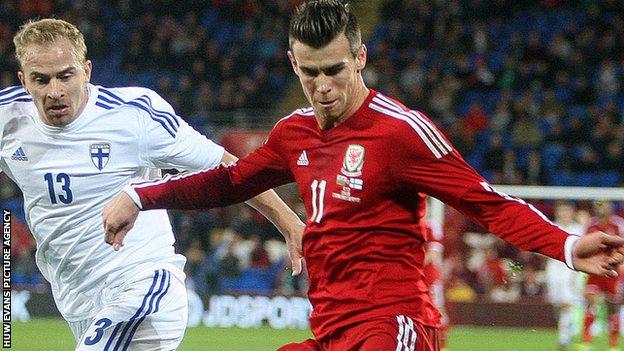 Manager Chris Coleman is prepared to allow Gareth Bale to sit out Wales friendlies in the future to protect the most expensive player in the world.

Bale, 24, who moved to Real Madrid from Totenham for £85m in the summer, played 90 minutes in Wales' 1-1 draw with Finland on Saturday.

Coleman is meeting Real to discuss how to manage the forward's commitments.

"If Bale's fighting fit then great, we expect him to be here. If he's fatigued, we might rest him," he said.

He'll probably say he wants to play in every game, [but] for the bigger picture it might be worth us saying: 'Just miss this one'.

"To be fair to him, in my two years the only friendly he missed was against Mexico with a back injury. He was there for the games against Bosnia and Austria.

"But he's playing a lot of games in Madrid. We have to look at it long-term as well. As much as we need him, we need to look after him."

"He'll probably say he wants to play in every game, [but] for the bigger picture it might be worth us saying: 'Just miss this one'."

His appearance against Finland earned Bale his 43rd Welsh cap in just seven years as an international player.

Coleman revealed he and members of his backroom staff are due to head to Madrid in the coming weeks to speak to Real boss Carlo Ancelotti and his assistant Paul Clement, who the Wales boss worked with at Fulham.

"That's a dialogue we have to have with Madrid," Coleman added.

"I spoke with Gareth on Friday. We are going to go over and speak with their whole staff to bring ourselves closer to Madrid.

"We have to build bridges. We need them with us.

"They have to know and be comfortable that when he comes with us, we know what we are doing with how we prepare because he has a special programme in Madrid regarding his rehabilitation.

"They have to feel comfortable that when he's with us we are doing everything to send him back in one piece."