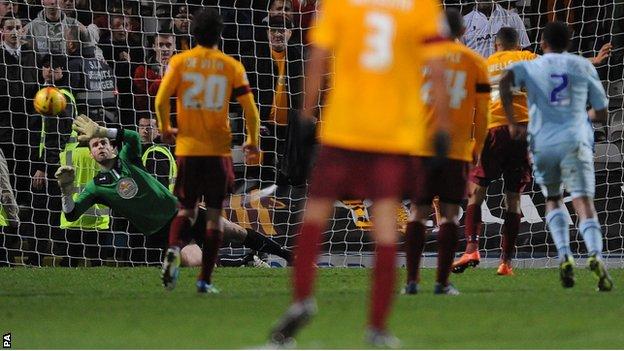 Bradford City manager Phil Parkinson praised the resilience of his players after they twice came from behind to rescue a point against Coventry City.

Parkinson told BBC Radio Leeds: "After going 2-0 down, and after the week we had last week, it was a big ask to come back, but we responded really well.

He was a constant threat, and I'm pleased for him because he's worked so hard in training this week and we sensed this would be the day he'd get back to his best

"The referee maybe did us a bit of a favour [with the penalty], but over the game as a whole we deserved a point."

He added: "A number of decisions went against us but we finally got a penalty, our first this season."

Coventry manager Stephen Pressley criticised Bradford's direct style of play after the match, describing it as "football from the dark ages".

But Parkinson, whose team went into the match on a run of six games without a victory, was more concerned about the manner in which his team fought back after two early errors by defender Rory McArdle left them with a mountain to climb against the in-form Sky Blues.

"There were so many good things from us, and some poor things too, because we gave a really good team a two-goal start, and you can't do that and expect to win," he said. "So to get a draw out of it - I'm really pleased."

"Nakhi has been out injured, and since he came back he hasn't been at his sharpest, but he looked electric," continued Parkinson. "He was a constant threat, and I'm pleased for him because he's worked so hard in training this week and we sensed this would be the day he'd get back to his best.

"At half-time we said the mistakes had happened and we had to move on - you can't play the rest of the game with it in your mind.

"There were times in the second half we tried to be too clever, lifting it over people's heads instead of just passing the ball, because at that time both teams were so tired and there was so much space to get that extra pass in, but that could be tired legs and tired minds from our point of view.