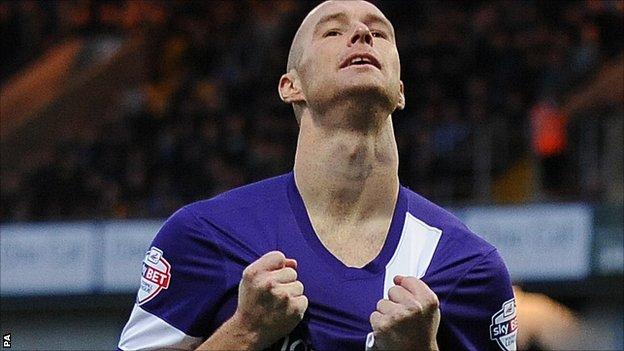 Oxford United striker James Constable spoke of his delight after finally scoring his 100th goal for the club.

Constable initially joined the club on loan from Shrewsbury in August 2008, scoring twice against Eastbourne to open his Oxford account.

And the 29-year-old reached his century with a crucial goal against Mansfield as the U's went top of League Two.

"It means everything to me," Constable told BBC Oxford. "They all mean something so just delighted to get it."

Constable, who is out of contract at the end of the season, revealed he was missing his brother's stag weekend to play in the game and said all 100 goals were special but Saturday's would live long in the memory.

"It took a while to go in, I thought it might go wide. It was just nice to see it go in," he said.

"Today's goal is up there because of the way the day has gone. I pretty much remember all the goals, I'm delighted to get to 100 and hopefully more will follow."

Constable began his U's career with the club in the Conference and he hopes his goals can help fire them into League One.

"The first couple are no different to this one," he said.

"I remember scoring a header here when we were in the Conference and Jim Smith was in charge.

"It seems a long time ago, but we're in a great position now and we are looking to continue that run."