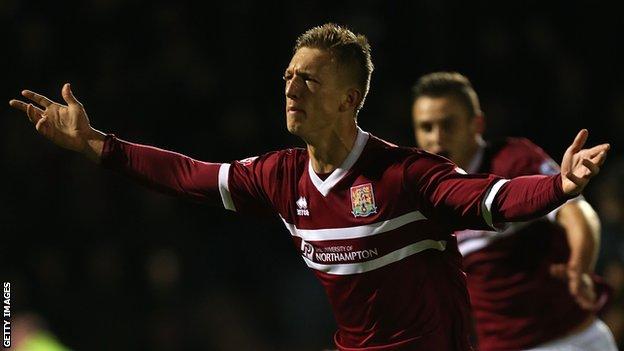 Northampton Town have extended the loan spell of top scorer Luke Norris from Brentford until 4 January.

The 20-year-old's late winner against Fleetwood on Saturday was his fifth in six games for the Cobblers.

Boss Aidy Boothroyd will also try to keep Bradford's Ricky Ravenhill, who has played twice since joining for a month last week.

"Ricky is exactly what we need. He's somebody I'd love to keep," Boothroyd told BBC Radio Northampton.

"Ricky is a great individual, good in the dressing room and on the pitch and players listen to him."

Boothroyd will also have to consider extensions for Jacob Blyth, Kane Ferdinand and Stuart Dallas.

Forward Blyth is on loan from Leicester until mid-December, midfielder Ferdinand has a one-month spell from Peterborough and defender Stuart Dallas is set to return to Brentford on 1 January.

"There's decisions to be made with the loan players. I've got a budget and thankfully the chairman has broken it to help us out," said Boothroyd.