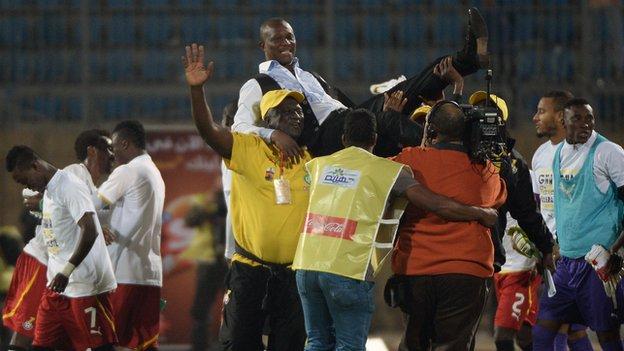 Ghana have made it through to next year's World Cup finals in Brazil, despite losing 2-1 to Egypt in the second leg of their play-off.

The Black Stars booked their place at a third successive finals thanks to a 6-1 victory in the first leg last month which helped them win 7-3 on aggregate.

Amr Zaki bundled home after 25 minutes to give Egypt faint hope in Cairo and Gedo rifled in a second late on.

But Kevin-Prince Boateng struck on 89 minutes to give Ghana the last word.

Egypt, playing in Cairo for the first time in two years, restored some pride with victory on the night.

But it is another heart-breaking qualification near-miss, having not appeared at the World Cup since Italia '90 despite winning an unmatched four African Nations Cup titles in the same period.

The home team went in front after 25 minutes when a free kick from Mohamed Aboutrika out on the right was not collected by goalkeeper Fatau Dauda and Zaki appeared to use his elbow to bundle the ball home.

Ghana showed little ambition to go forward in search of an equaliser, while Egypt found it tough to break down their stubborn defence.

The hosts went close when a shot from Gedo was cleared off the line by Jerry Akaminko, with Dauda again failing to deal with an aerial ball.

The game opened up in the final 10 minutes and Gedo was on target in the 86th minute when he collected a pass from Mohamed Salah and blasted low past Dauda.

Ghana then exploited some gaps at the back, with Asamoah Gyan finding space on the right before firing in a low cross that was turned in by Boateng.