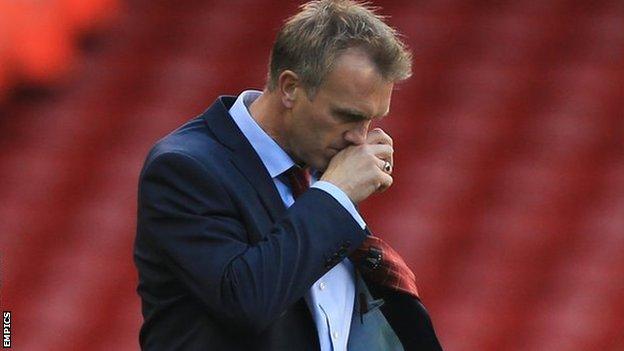 Crewe Alexandra boss Steve Davis could be ready to enter the emergency loan market after losing patience with some of his under-performing players.

"I have big decisions to make about the squad," Davis told BBC Radio Stoke.

"Is it going to take us where we want to go? There's no signs of that."

Davis added: "Maybe it is time that we bought a couple of players in and freshened it up. That might get the others going.

"It's going to be a real battle this season. They've all got to work harder and keep fighting for the cause.

"If they're with us we'll stick with them. The ones that aren't will get left behind and replaced.

"I've been fair to the players. I always said after about 15 games I'd reassess it.

"We've gone just beyond that now. And I've got to do something about it.

"We have looked in the loan market. And, if I can get that quality in, it's going to help us."

Crewe are only a point from safety in League One but they have now shipped four goals or more on their travels four times this season, as well as having suffered three 3-0 home defeats.

And their current resting place of 22nd in the table, having picked up just one point from a possible 12, is in marked contrast to the success they have enjoyed under the highly-respected Davis, at one point a serious summer target for Wolves, over the last two years.