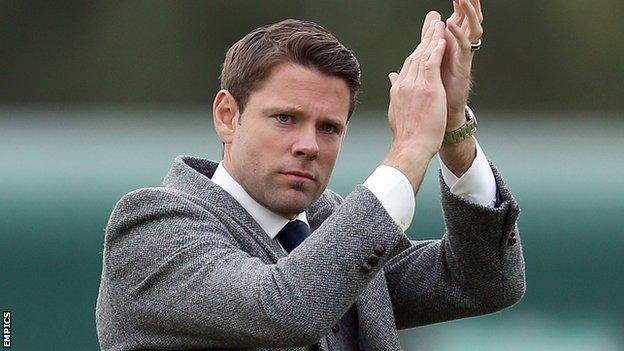 James Beattie says Accrington can still improve on the six-game unbeaten league run which has seen them climb out of the League Two relegation zone.

They had been cast adrift at the foot of the table, but lifted them up to 22nd.

"A few weeks ago we probably wouldn't have seen that result out. I think there's more to come from them."

The former England striker continued: "The word now is 'concentration' and being consistent by sustaining a level of performance that can bring the points to us every week."

Defender Tom Aldred added that moving out of the bottom two is a huge psychological boost for the squad, who

The 23-year-old commented: "We always said that once we got out of it, we'd start looking up the league and not at what's behind us.

"We want to move out of this area and look up the league, which is what we're doing now. On the basis of Saturday's performance, we can do that."

Beattie selected George Bowerman and on-loan forward Kayode Odejayi up front against Scunthorpe and both scored in the win at Glanford Park.

"I've got a nice headache for once," said Beattie, who has Danny Webber and James Gray as alternative attacking options.

"If players are playing well, they keep the shirt. The competition for places is thriving at the moment within the group."