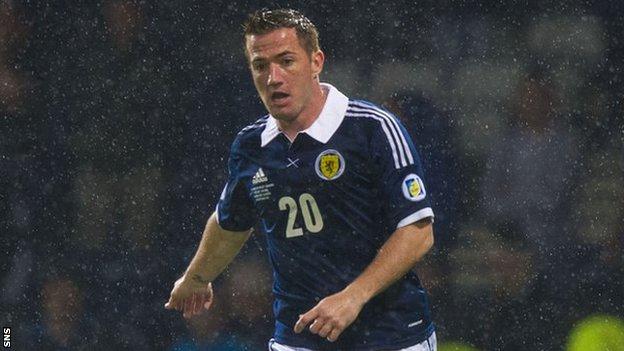 Leeds United striker Ross McCormack is the latest striker to pull out of Gordon Strachan's squad for Tuesday's friendly against Norway.

And Blackpool goalkeeper Matt Gilks has also withdrawn from the game in Molde.

McCormack revealed on his Twitter account that he had returned to his Championship club after picking up a hamstring injury.

"Heading back to Leeds having had to pull out the Scotland squad. Typical!" said the 27-year-old.

McCormack had himself been called into the squad as cover after an injury to Blackburn Rovers' Jordan Rhodes ahead of the 0-0 draw with USA.

He earned his 10th cap as a substitute in Friday's game and was in contention for a starting place in Norway after Sunderland's Steven Fletcher was subsequently allowed to return to his club after starting at Hampden.

But McCormack is hopeful that he will be fit for Saturday's visit by Middlesbrough.

Leeds' official Twitter feed also confirmed the player's withdrawal, saying he was returning to Elland Road for "treatment on a slight hamstring injury".

Meanwhile, Gilks followed McCormack in missing the flight to Norway after being assessed by Scotland's team doctor for an undisclosed injury.

The 31-year-old was an unused substitute as Cardiff City's David Marshall kept goal against USA.

Partick Thistle's Scott Fox, who had received his first-ever call-up to the squad, is the other goalkeeper in the party heading for Norway.