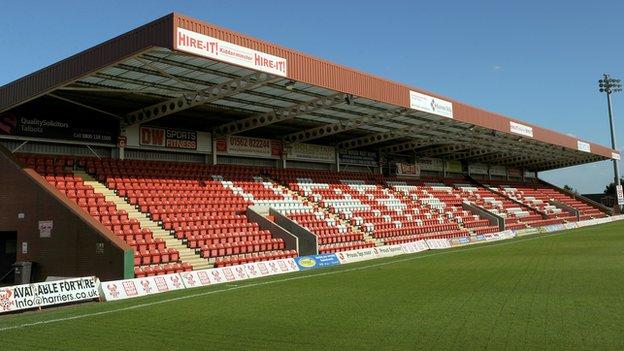 AFC Telford United boss Liam Watson is targeting an FA Trophy run for the five-times finalists after being handed a first round tie against Worcester.

Telford are drawn to visit Aggborough to play their homeless Conference North rivals on 30 November - ironically, on the same day that the two clubs were due to meet in the league.

"It's a team in our league, and we're above them," said Watson.

"We'd have preferred a home draw, but we look at it as a very winnable game."

After Saturday's 6-0 third round qualifying win over Scarborough Athletic on Saturday, the Bucks are in exuberant mood.

Two divisions separated the two teams before kick-off and that gap was soon evident as goals from Sean Clancy, from the penalty spot, and Mike Grogan put the Bucks firmly in control.

Grogan then added a second before an Adam Farrell thunderbolt and late goals from Simon Grand and another penalty, from Tony Gray, saw Telford to their fourth home victory in a row.

Now the three-time winners, who have more post-war Wembley appearances to their name than any other non-league side, are in the mood for more.

"For any player, there's the thought of playing at Wembley, so I'm looking for a good run in what's a fabulous competition."

The Bucks have traditionally proved to be a tough opponent for City, who are bottom of Conference North.

Carl Heeley's side have won just once in the league all season and are 19 points behind sixth-placed play-off hopefuls Telford, who have lost just once in their last eight league games.

But, despite their poor league form, City reached the fourth qualifying round of the FA Cup run, which which saw them draw them 1-1 with Conference Premier club Lincoln before losing the replay 3-0, and won Sunday's home Trophy tie against Ramsbottom United 3-0.