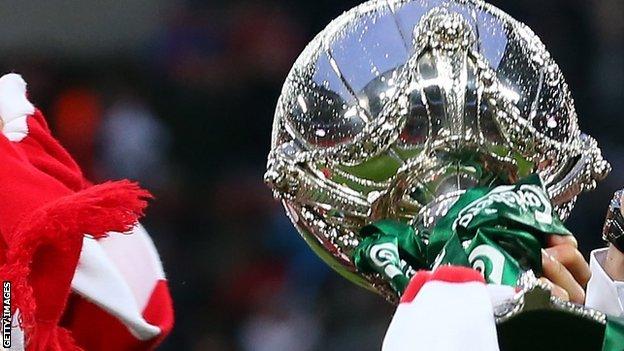 The Football Association has confirmed that Saturday's abandoned FA Trophy tie between Colwyn Bay and Altrincham will be replayed in full on Tuesday.

The first attempt to stage the game was with Altrincham leading 2-0, when referee Mark Ackerman suffered an injury.

"When a first match has been postponed, or is abandoned before the completion of 90 minutes and neither club being at fault, it shall be played on the same ground on or before the following Thursday.

"Matches abandoned through the fault of the clubs shall be dealt with by the National Game Board."

The winners of the rescheduled tie will host either Brackley Town or Leek Town in the first round proper.

There was no designated fourth official available on the day.

A qualified referee in the crowd offered to complete the game but the home side rejected that as a possible solution to the problem, claiming he had been drinking alcohol.

An offer from Altrincham coach Ian Senior to run the line was also turned down.

Meanwhile, Colwyn Bay boss Frank Sinclair told BBC Radio 5 live's Non League Show that his club were "within their rights" not to complete the match and that he expected the game to be replayed.