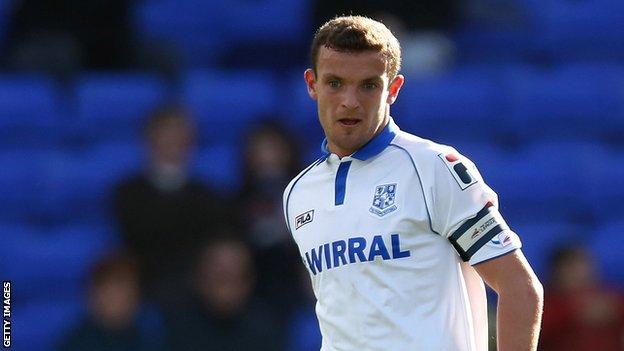 Tranmere manager Ronnie Moore is hoping that supporters do not put too much significance on captain James Wallace's return from long-term injury.

The 21-year-old midfielder has and his absence with a knee problem coincided with a serious slump in form last term.

Wallace may make a first-team return for Rovers, who are in League One's relegation zone, in the next two weeks.

He told BBC Radio Merseyside: "It doesn't happen like that. It will take him time."

Rovers were due to face Manchester United in a practice match on Tuesday but that has now been cancelled, so Wallace will now play in a reserve fixture at Walsall to get more valuable time on the field.

"Hopefully he can get 90 minutes," added Moore. "The physio has marked him down for the Colchester game [on 30 November] but if he comes through, we've got two important games coming up [against Coventry and Wolves].

"We could sit him on the bench and maybe use him if we need him for half an hour, but he's got to be right in his head to do that. I won't put him there for show."

Tranmere were top of League One when Wallace was hurt in an FA Cup tie against Chesterfield and have won just 11 of the 42 league games during his long injury absence.