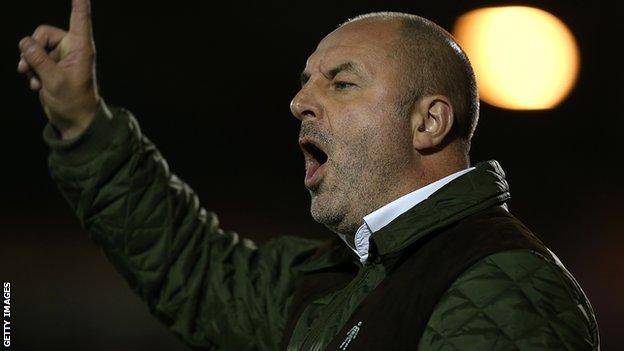 Rochdale boss Keith Hill says being sacked by Championship club Barnsley last December did not dent his belief that he could be a top manager.

Hill left Dale to and spent 18 months with the Tykes.

He told BBC Radio Manchester that he is better for the experience, from which Rochdale - who lie third in League Two - are now reaping the benefits.

"With respect to losing my confidence, absolutely not," said Hill, 44.

He and has guided them into the automatic promotion spots in the fourth tier, having steered the club clear of relegation in the final three months of last season.

"When I took over, I do believe the club [Rochdale] was on the slide," he continued. "Now I believe, as do the board of directors and the supporters, that we're on the rise again."

Hill began his managerial career at Spotland and led Dale to promotion from League Two in 2010 before taking them to ninth in League One the following season, equalling the best finish in the club's history.

It earned him the job at Barnsley where, under tightening financial constraints, he kept the club in the Championship in his first campaign.

But Hill was dismissed with the Yorkshire outfit bottom of the table and who eventually saved Barnsley from the drop.

"If you're not a Barnsley supporter, you've got to look at the bigger picture, and for Barnsley to remain in the Championship is a massive success," continued Hill.

"We were trying to change the football club with the cycle of Financial Fair Play before anybody in the Championship considered it, and we did it. That's where I believe we were successful."

He added: "The one thing I didn't get right was the results on the pitch, which obviously didn't save me from getting sacked, but I was expecting not to be in a position where my job was under scrutiny because I thought everybody knew what it was that we were trying to do."