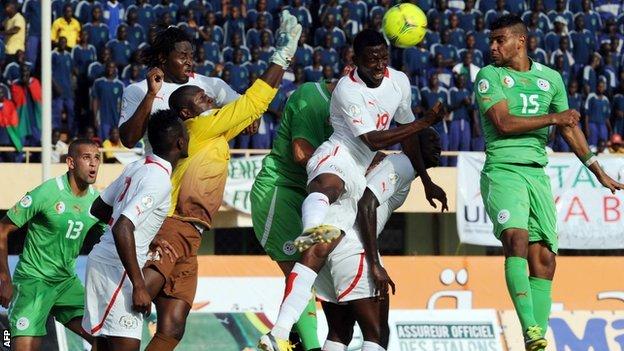 Algeria beat Burkina Faso 1-0 in their World Cup play-off second leg in Blida to qualify for Brazil on the away goals rule after a 3-3 aggregate draw.

Trailing by one goal after last month's first leg, Algeria produced a patient and disciplined performance to stifle Burkina and nick the goal they needed.

Madjid Bougherra claimed Algeria's goal when the ball rebounded in off him from Bakary Kone's attempted clearance.

Algeria avoided a late own goal when the ball crashed back off their bar.

It would have been cruel on the hosts had Burkina profited right at the last, especially as the visitors barely created a chance of the own throughout the match.

And although Algeria hardly played an uninhibited game themselves they did enough to secure their fourth appearance at the finals and their second in succession.

In a tense first half, chances were virtually non-existent. Burkina had the ball in the net early on but the referee had long since blown for an earlier infringement and in the only other incident of note Islam Slimani sent a head off target despite being unmarked in the box.

With just one goal in it and the sides evenly matched, it was clear that neither side were prepared to take any risks.

And so the pattern continued after the break, until a slice of good luck handed Algeria the advantage.

After Bougherra had poked the ball towards goal, Kone attempted to thump the ball clear but instead it hit the Algerian skipper and the ball bounced off him and into net.

It was all Algeria needed to boost their confidence and they took almost complete control after that. And Slimani sent a shot just wide after swivelling to find space as Algeria threatened to add to their lead.

Burkina were unable to muster any attacking impetus as they were forced back by high pressing from Algeria and simply could not come up with any creative ideas.

With virtually the last action of the game, Algeria scrambled to get ball clear from a corner and the ball smacked against the bar, taking with it Burkina's hopes of a goal that would have sent them to Brazil.

Instead, Algerian players and fans celebrated wildly as the full-time whistle blew almost immediately after - even though it seemed there should have been at least six or seven added minutes time because of time-wasting.