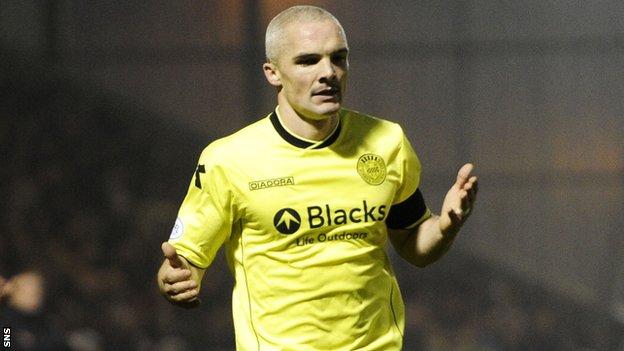 St Mirren's Jim Goodwin thinks it is absurd for Ross County boss Derek Adams to suggest he is favoured by referees.

Adams said Goodwin "kicks lumps out of people and nothing happens" following his side's 2-1 defeat in Paisley.

But the Buddies captain told BBC Radio Scotland: "For Derek to suggest I have some sort of immunity from referees is quite laughable.

"I pick up far too many bookings as it is and for him to single me out to referees is a bit silly."

Goodwin, 31, is suspended for Saturday's home game with Hibernian.

County finished Sunday's game with nine men and although Adams conceded both red cards were deserved, he added: "Goodwin probably committed the most fouls in the match of any player - he seems to be immune from anything."

Adams went on to joke that Goodwin must be "a ghost" because referees don't see him.

"The boys in the dressing room have had a right good laugh with it," explained the Saints skipper.

"But I was slightly disappointed with some of the comments.

"I walked off the park and shook Derek's hand and there didn't seem to be any bad blood.

"So for him to slaughter me publicly and say I kick lumps out of people and that I go around intimidating people was a bit uncalled for.

"I like to think I play the game hard but fair and I expect the same back.

"I don't think it's right for any manager or any player to be slagging off an opponent."

When St Mirren last faced Hibs they slumped to a 2-0 defeat in Edinburgh in September that meant they had picked up just one point from their opening six league matches but a run of four wins in their last five has taken them to within a point of the seventh-placed visitors.

"Obviously, it was a very difficult start to the season, the manager was under pressure and we were coming in for all kinds of criticism," said Goodwin.

"But we believed we could turn it around and we've picked up a bit of form and some really vital points along the way.

"Now we find ourselves sitting eighth in the table, which would have been hard to believe five or six weeks ago.

"It's difficult to pinpoint what we've changed but a win gives you so much confidence.

"When you're down there you don't get the breaks of the ball or bits of luck and things go against you.

"It was hard for the young boys but full credit to the team and the coaching staff, we all stuck together.

"We've been working hard on the training ground and we've tweaked one or two things. We were probably playing too much football at times.

"We were bringing problems on ourselves but now we are able to mix it up well.

"We can still play decent football but we can also go route one to big Thommo (Steven Thompson), who has been in exceptional form of late."