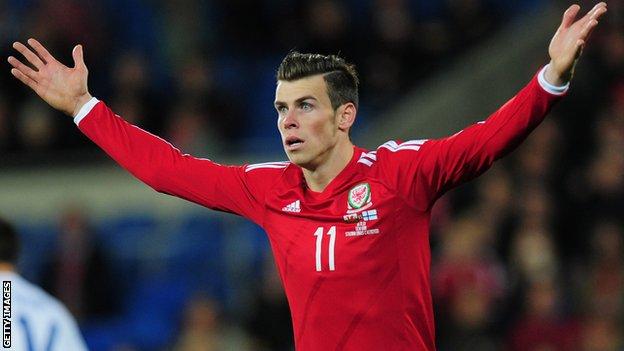 Real Madrid winger Gareth Bale should sit out some of Wales' friendlies in the future says Iwan Roberts.

Wales boss Chris Coleman concedes that he may have to rest the world's most expensive player for friendly matches in future.

Ex-Wales striker Roberts understands why Coleman would be prepared to allow the 24-year-old to miss some non-competitive games.

"I can understand what Chris is saying," Roberts told BBC Radio Wales.

He could be the difference between taking us to France and us not qualifying for France. He is that important to us.

Wales' next competitive fixture will be next September when the qualifiers for Euro 2016, the finals of which will be held in France, begin.

"First and foremost we want him fit for every competitive game," Roberts added.

"It's disappointing because you want to see Gareth play every game but where do you draw the line?

"Chris and the Welsh FA have got a good relationship with Madrid and their medical staff as they probably have with all the clubs that the players represent.

"You've got to keep a fine balance."

Bale, 24, who moved to Real Madrid from Tottenham for £85m in the summer, played 90 minutes in Wales' 1-1 draw with Finland on Saturday.

Coleman and members of his backroom team will meet Real boss Carlo Ancelotti and his assistant Paul Clement to discuss how to manage the forward's commitments.

"If Bale's fighting fit then great, we expect him to be here. If he's fatigued, we might rest him," Coleman said.

"He'll probably say he wants to play in every game, [but] for the bigger picture it might be worth us saying: 'Just miss this one'."

Roberts believes former international team-mate Coleman is right to adopt such an approach with Bale, who left Tottenham Hotspur for Real Madrid at the start of the season.

"If he's playing a lot of games for Madrid, which if he's fit he's going to, and he's looking tired Chris might decide not to call him into a friendly squad," Roberts said.

"I can understand that. He's had injury problems in the past, he's missed quite a lot of time out through injury.

"It hasn't happened yet. We're going to have to wait and see what happens in the future whether Gareth does miss a lot of friendlies and then I think more will be said about it."