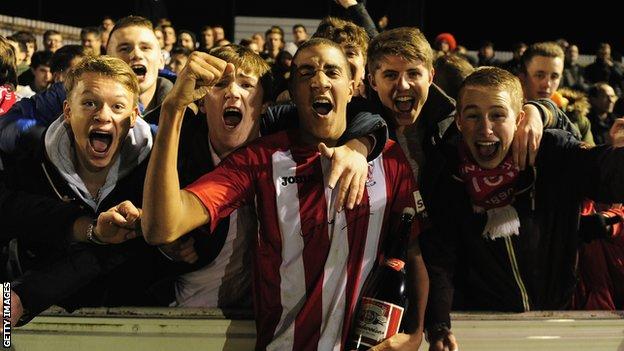 Brackley Town manager Jon Brady believes his side deserved their shock 1-0 victory over Gillingham in the FA Cup first round.

The Conference North side beat their League One opponents to advance to the second round for the first time.

Brady told BBC Radio Northampton: "In my opinion, we've outplayed a League One side, and I've just beaten an ex-England manager [Peter Taylor].

"It's an amazing night. Words couldn't do tonight justice."

He continued: "I always believed we could do it and I had the players believing.

"We needed nine-out-of-10 performances from everyone again. I really enjoyed that. It's special times at the moment."

Brady, whose side were just moments away from beating Gillingham at Priestfield before Bradley Dack's goal deep into injury time forced the tie to a replay, handed young goalkeeper Alastair Worby just his second appearance for the club after first-choice Billy Turley was ruled out through suspension.

I'm a bit overwhelmed and lost for words. I've done what I can and it's paid off

Worby, 20, went on to make a string of saves at St James' Park and only Glenn Walker's goal separated the two sides after more than 180 minutes of football.

"We tried to take the pressure off Alastair by saying [assistant manager] Darren Collins or an outfield player was going to go in goal, and we kept him under wraps," Brady said. "I told him we'd talk about everyone but him. It took the pressure off.

"I asked him if he wanted to do it and he looked me straight in the eyes as he said that he did. He deserves all the credit he gets."

Worby, who has previously been on the books at Reading and St Johnstone, added: "I only gave [manager] Jon Brady a call two months ago and he said to come in and train.

"I'm a bit overwhelmed and lost for words. I've done what I can and it's paid off."

"It came as a surprise because I wasn't sure when Billy's suspension started. Jon rang me on Tuesday morning to say I should prepare myself and then show what I can do to them and everyone else."