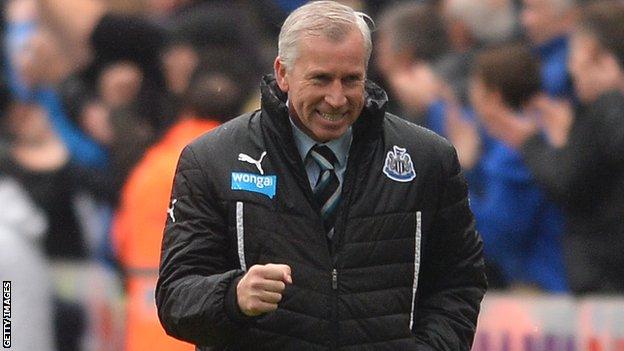 The Magpies beat and before the international break and are now ninth in the Premier League table.

Hatem Ben Arfa and Papiss Cisse started both games on the bench as Pardew went with Yoan Gouffran and Shola Ameobi.

With 134 appearances from the bench, Newcastle United striker Shola Ameobi is the Premier League's most used substitute.

In the Magpies' 14 matches this term, they have kept six clean sheets and Ameobi started in five of those games.

"The gaffer's been searching for a mix that would give us some consistency in performance and now the team is working really well together," said Williamson.

"Keeping clean sheets against Chelsea and Spurs shows he has found the right balance to keep it tight.

"It's a great platform because we know with the quality we have in attack, we'll score goals."

Williamson has made 108 appearances since joining the club from Portsmouth in January 2010.

But the 30-year-old reserved his own praise for the contribution of Nigeria striker Ameobi,

"Defenders pride themselves on clean sheets, but it's been a huge team effort with us defending from the front," Williamson told BBC Newcastle.

"Shola is so important for us and has been vital since coming into the team. He's a great character to have around the training ground and I think the lads would agree he deserves any reward he gets."