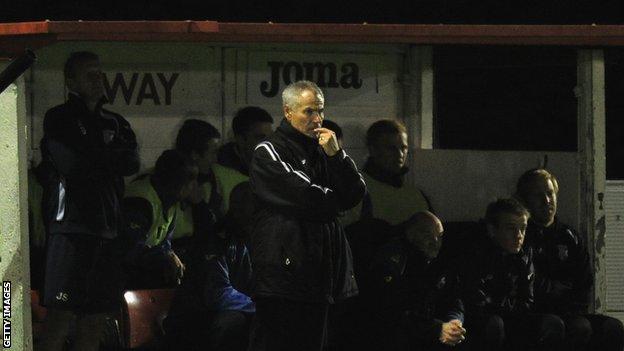 Gillingham manager Peter Taylor feels luck was not on their side in their FA Cup defeat by Conference North side Brackley Town on Monday.

The Gills hit the woodwork three times and had a goal ruled out for offside as they lost their first-round replay 1-0.

He told BBC Radio Kent: "We played some tremendous football, created a load of chances and scored a goal that was perfectly good. We had no luck at all.

"In that respect, it's gone against us tonight. It's not nice losing."

Taylor, who has been appointed manager until the end of the season, says his players "did everything they could" to win the match.

"I have no complaints with the way we played. The only thing we maybe didn't have enough of was the end product.

"For the actual football and crosses and chances created, I was over the moon with the players.

"There are no easy games in the FA Cup - that's the greatest thing about it.

"The result is a step back, not the performance. I'll take the situation in reality."