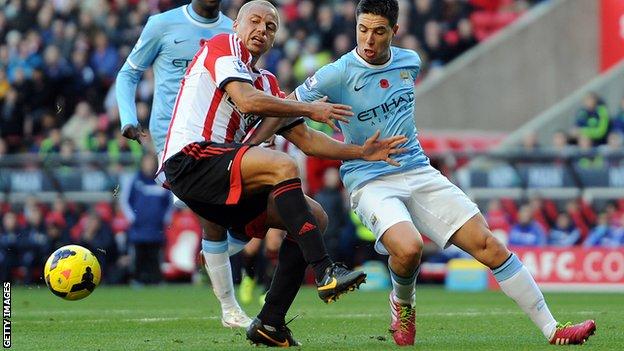 Sunderland then went on to

"Against City, Wes was unbelievable, it looked like he had never been away - he is a top-class player," said Johnson.

Defender Brown, 34, missed the whole of last season with a succession of injuries having limped off an hour into

Without Wes Brown, Sunderland have conceded 24 times at an average of one every 43 minutes. With him, it's once in 225 minutes.

Since coming on against Hull, when Sunderland were down to nine men and 1-0 behind, he has been ever-present and the Black Cats have conceded just once.

"The City game gave us such a lift and we wanted to play again as quickly as possible so it wasn't ideal to have two weeks [for the international break] until the next match," Johnson told BBC Newcastle.

"But on the other hand, the break gives Wes some recovery - although quite honestly he's been training as hard as anyone."

and has made 54 appearances for the Wearsiders.

But before the November trip to the KC Stadium he had never played alongside former England and Manchester United defender Brown.

"Ever since I came here I've been desperate for him to get fit because everyone has told me just how good he is," Johnson added.

"I think the Hull game where we played the second half with nine men and almost nicked something just gave us unbelievable belief as a group.

"But since Wes came back I think you can see the defensive improvement - it's a massive turnaround."