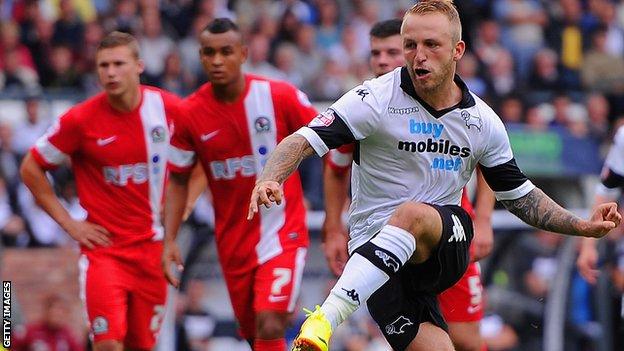 First-team coach Paul Simpson says the imminent return of several injured players will make it feel like Derby have been on a mini spending spree.

Several injured players are due to return in the coming weeks.

Striker Johnny Russell and midfielder Jeff Hendrick could be involved against Bournemouth on Saturday.

The signs are good with Johnny and Jeff. They have both competed a number of sessions.

"Although the loan window closes on 28 November, we could have our own transfer scoop in early December," Simpson told BBC Radio Derby.

"We might have three or four players that may come back into the fold and I am sure over Christmas and New Year they will be valuable.

"The signs are good with Johnny and Jeff. They have both completed a number of sessions."

Defender Zak Whitbread and goalkeeper Adam Legzdins are also both nearing fitness, with defender Mark O'Brien and midfielder James Bailey not far behind.

"We are hoping to get Zak training by the end of the week," Simpson added. "He has done some light work but I would think this weekend will be a bit too early.

"Adam is coming on and hopefully he may get a game next week as well for the under-21s."