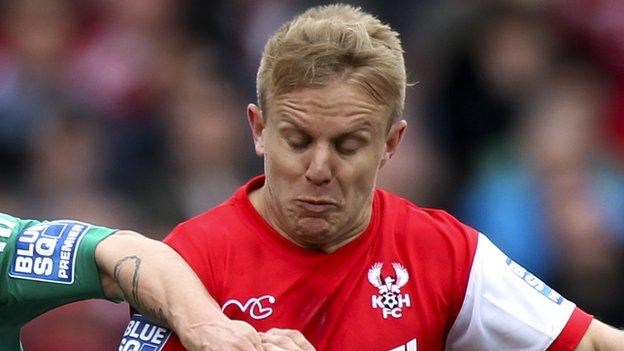 Kidderminster's Danny Jackman says Saturday's Conference Premier defeat of Wrexham was a timely return to form after two league games without a win.

Following a 1-0 defeat at Barnet, followed by the frustration of conceding a last-minute equaliser at Macclesfield last Tuesday night, Harriers bounced back to win 3-1.

"The Macc game took a lot of out of us," he told BBC Hereford & Worcester.

"So it was important to get back on course and return to winning ways."

Midfielder Jackman, who has done well at left-back deputising for Mickey Demetriou in recent weeks, added: "We were under bits of heavy pressure in midweek.

Harriers duo Mickey Demetriou and Joe Lolley have both been called up for England C's game against the Czech Republic Under-21s at Kingfield, Woking on Tuesday

"So it was nice to come and get a result in a big game."

League leaders Cambridge United have also stumbled of late, picking up just two points out of a possible nine away from home.

And Saturday's win over Wrexham, the team who ended the Harriers' promotion hopes in the play-offs in April, helped Steve Burr's men climb back to second in the table and reduce the gap to six points once again.

But Harriers now also have the FA Trophy, as well as the FA Cup, to contend with.

After this Saturday's home league date with Tamworth, they will not have another league game for three weeks.

Harriers, winners in 1987, kick off this year's Trophy campaign with a return trip to Bradford Park Avenue on Saturday, 30 November.

Burr's side are then set to face the winners of Tuesday's FA Cup replay between Newport and Braintree in the second round at Aggborough on 7 December.

Meanwhile, Jon Harris has left his post as the Harriers general manager.

The club will appoint a replacement, but intend to downgrade the role to that of football secretary.