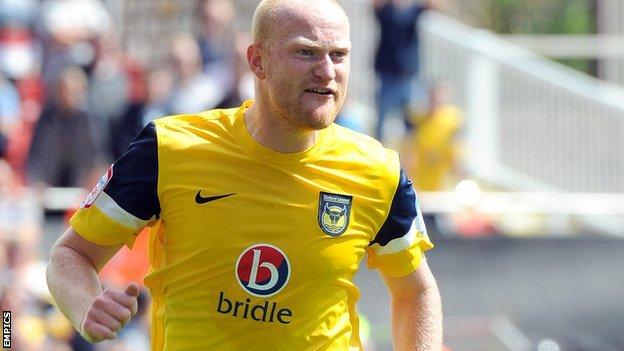 Oxford United defender Andy Whing will undergo scans on Tuesday to determine the true extent of his ankle injury.

The 29-year-old has already been ruled out of Wednesday's FA Cup first-round replay at Gateshead and will not feature in Saturday's League Two home game against Morecambe.

"It sound quite serious the way he is talking to us," U's coach Andy Melville told the club website.

"We'll know more further down the line, but he could be a long-term casualty."

Whing, who signed a new two-year deal at the Kassam Stadium in June, returned from a groin injury against Mansfield on Saturday but only lasted 26 minutes before limping off with an ankle complaint.

He joins a mounting Oxford injury list, with Jake Wright sidelined and Alfie Potter and Jon Meades also out with ankle injuries.

Deane Smalley (groin) has been ruled out of Wednesday's trip to the International Stadium after going off injured against the Stags, while James Constable and Dave Kitson are yet to prove their fitness.

"We will have to dig deep into the development squad it seems at the minute," Melville said.