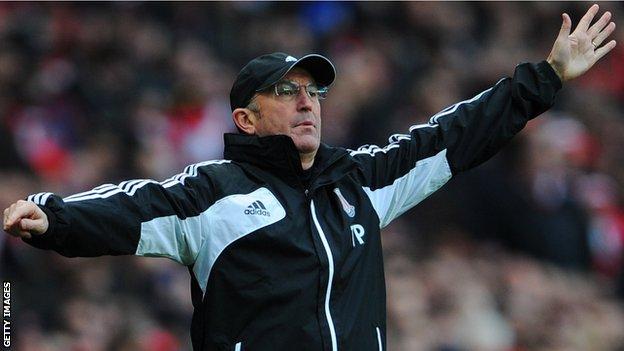 Former Stoke manager Tony Pulis says he is open to job offers from outside the Premier League.

And the 55-year-old, who has been linked to the Crystal Palace job, is biding his time for a suitable opening.

"I do enjoy picking clubs that are maybe not as successful as others and trying to make something of them," Pulis told BBC Radio Solent.

"I've managed in every league and enjoyed it, so it doesn't have to be in the Premier League."

He added: "It just has to be the right job and got to be a challenge."

Pulis left the Potters by mutual consent in May after seven years in charge.

He guided Stoke to the Premier League in 2008 and the club never finished lower than 14th in five top-flight campaigns under him.

Pulis also led the club to their first FA Cup final in 2011, when they lost 1-0 to Manchester City, which earned them the right to compete in the Europa League the following season.

He said he had not been short of offers since leaving the Britannia Stadium and was ready to consider returning to work.

"There has been lots going on, but it has been nice to be in a position that I can have a break and not worry too much about it," he said.

"I've enjoyed the break, and probably needed it after 12 consecutive years managing. I'm getting itchy feet now and want to get back into it. I guess it's either in your blood or not."