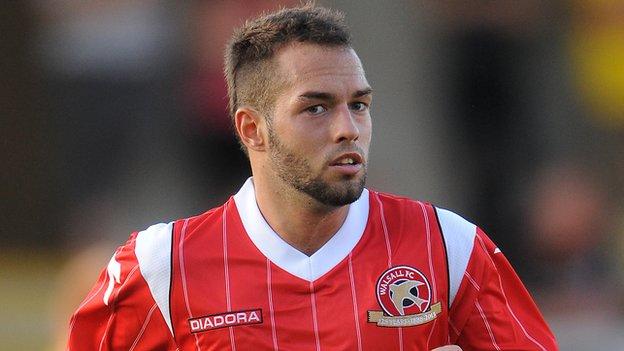 Walsall's on-loan Chelsea winger Milan Lalkovic says that the future is in his own hands as he prepares to build on his burgeoning reputation.

Lalkovic enjoyed a key role in Monday night's impressive televised 2-0 win over Peterborough United, scoring the first goal and setting up the second.

"If I keep playing like this it will help my career," said the 20-year-old.

"If I do well, there will be options. This is what I can do. I have to perform like this every week."

Lalkovic's immediate future will be decided in January when his half-season loan expires at the Banks's Stadium and he will have three options - returning to Chelsea, getting another possibly higher-standard loan move or remaining in the Black Country.

"There is still life after Chelsea," added Lalkovic. "Other players have left there and done well.

"It's up to me to keep doing this then I will move on. If I keep playing like that, then obviously I won't be here."

For the moment, Lalkovic is just happy to be with Walsall, having started playing so well for a Saddlers side who, just one point off the League One play-offs, suddenly look a very good bet for promotion.

"This is only a start," Lalkovic told BBC WM. "There's not even 20 games gone yet.

"But we have beaten good teams already and we have to keep doing it.

"We always try to play football. If someone does something wrong then everybody backs him.

"We have good players. A lot of the players have been at Premier League clubs.

"And we have good coaches. It was Dean Smith's number two Richard O'Kelly who took me to Doncaster, which was my first taste of professional football. Obviously, he spoke to the gaffer, I came here and that was it."

Lalkovic also admits that not having gone away on Slovakia Under-21 duty during this international break has been a help.

"I go away, the team does well and it takes three games to get back in the team," he said. "But I don't think I will have this problem any more."