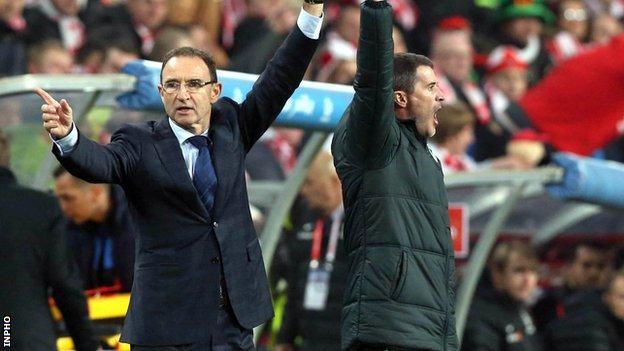 Republic of Ireland boss Martin O'Neill praised his side's resilience as they battled to a 0-0 draw against Poland.

O'Neill remains unbeaten as Republic boss, having begun his reign with a 3-0 win over Latvia in Dublin on Friday.

"We are away from home and it's a good result in that sense," said O'Neill.

"We can improve on lots of things and the players think that themselves. It was tough going at times - there were very few chances but we saw it through."

He added: "I won't see them for some time now and I'll have withdrawal symptoms. I'm not so sure it will be the same for the players."

We lost a little bit of shape in the last 10 minutes of the first half, and the changes we made disrupted the rhythm

The Irish gave as good as they got for long periods at the Municipal Stadium, but found themselves having to defend for dear life as time ran down with the Poles desperately trying to provide their own new manager, Adam Nawalka, with a first win of his fledgling reign.

"The pitch was very sticky. There were some divots pretty early, maybe from last night's training," O'Neill said.

"I thought we started very well and got it down and played it. We lost a little bit of shape in the last 10 minutes of the first half, and the changes we made disrupted the rhythm.

"But at the end of it all, there were loads of things to take out of it. It's been really enjoyable for me."

The hard-fought draw with the Poles maintained a positive start for the 61-year-old former Celtic, Aston Villa and Sunderland boss.

However, O'Neill and his squad will not reconvene until March, when they entertain Serbia at the Aviva Stadium, and that is something to which he will have to get used.

"I might be on the phone to them, but I'm not sure they are looking forward to that," he added.