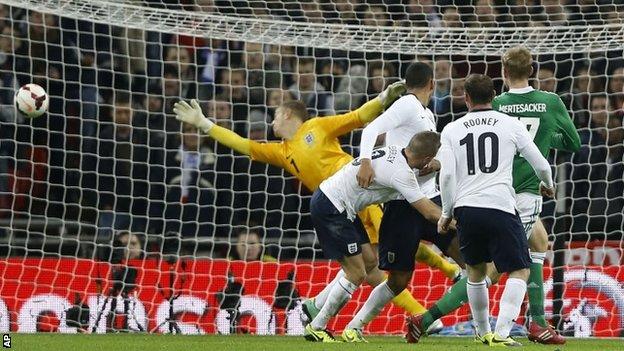 Germany coach Joachim Low - with a style and grace matched by his team - ended his victory speech with thanks to England for their Wembley invitation and the words: "See you in Brazil."

England must hope they hang around long enough in South America to even be in the later stages with the German side.

If you wanted to add further mischief to Low's message you could suggest he would be only too happy to see England again because he would be so confident Germany would come out as convincing winners.

After the acclaim of World Cup qualification, this has been a chastening five days for England and Hodgson as their place in the world order was emphasised by losses against Chile and Germany, by 2-0 and 1-0 margins respectively.

Two defeats without a goal. A defeat without a shot on target against Germany - even though Hodgson indulged in a spot of straw-clutching by suggesting Andros Townsend's shot against the post actually qualified under that category. Sorry Roy, not really.

So no shots on target, statisticians gleefully revealing this is the first time the fate had befallen England since the 1-0 defeat to Scotland in November 1999, and jeered off for the second Wembley game in succession. It was a freezing night when England felt the cold chill of reality in their bones.

England eventually negotiated their way out of their World Cup qualifying group but Chile and Germany represent the sharp end of what they might face in Brazil, and the indicators were not good.

Hodgson insists these two games have been an important fact-finding exercise as he considers his squad for Brazil. He will be hard pushed to find many positives with only one more friendly, at home to Denmark in March, before he has to put pen to paper on the provisional party that will fly to the World Cup.

How did Hart do?

Low gave Borussia Dortmund goalkeeper Roman Weidenfeller his first cap at 33 - and he has seen almost as little international action after his debut as he did before it. He was redundant.

England captain Steven Gerrard insisted before the game that the gap between the countries had narrowed since that harrowing day in Bloemfontein at the South Africa World Cup in 2010 when Fabio Capello's men were beaten 4-1.

When all the facts and evidence were taken into account here, it may not have narrowed by much.

If England have improved, so have Germany. The gulf remains.

Hodgson declined to take too many positives but once again, as he did after Chile, suggested he had learned lessons. They were harsh ones.

Germany were more assured in possession, more incisive in and around the penalty area and boasted strength in depth Hodgson can only admire, even if he would not confess to envy.

He may even have learned, in his more brutally honest moments, that this England team has "last 16" written all over it for next summer's World Cup - last eight if they touch lucky in the draw. Not Hodgson's fault, simply the reality he is dealing with.

Hodgson can take small solace in the outstanding performance of goalkeeper Joe Hart, who demonstrated the natural ability that still exists despite his authority being reduced by a run of poor form and eroded confidence.

So with that single friendly left to play, where do England stand as Hodgson pores over his plans for six months hence? And what has Hodgson learned?

Joe Hart's display on Tuesday confirmed that it would take something bordering on catastrophic, or injury, to stop him taking his place in England's goal for their opening World Cup game in Brazil. He is England's undisputed first choice.

The intrigue surrounds who will accompany him. Celtic's Fraser Forster emerged unscathed from his debut in defeat to Chile but Norwich City's John Ruddy never got his chance.

This suggests Ruddy is vulnerable once Ben Foster, who counts Hodgson as a major fan after their time together at West Bromwich Albion, is fit again but Forster may yet come under challenge from Jack Butland if he can get some serious game time between now and the end of the season.

Liverpool's Glen Johnson and Tottenham rival Kyle Walker were both vulnerable against Chile and Germany respectively and injury may yet play a part - but Johnson's previous record under Hodgson and greater experience suggests he is in pole position for Brazil right now.

England's hottest selection topic is no nearer resolution today than it was before these friendlies. Everton's Leighton Baines was uncharacteristically poor against Chile after two outstanding World Cup qualifiers against Montenegro and Poland but Ashley Cole, while not making any serious mistakes against Germany, is not playing with the authority of old. He is also susceptible to injury and was taken off with a recurrence of his rib problem.

This one could run and run until the first game at the World Cup.

England's World Cup qualifying pairing of Gary Cahill and Phil Jagielka seem certain starters but the back-up of Manchester United pair Chris Smalling and Phil Jones has not looked convincing over their past two friendlies.

Cahill and Jagielka are two fine Premier League performers but may be found out by the world's best at the World Cup - and there is not a huge amount of pace about.

A little bandwagon has started rolling, at a snail's pace admittedly, in favour of dusting off the retired Chelsea veteran John Terry. This will not happen and has more than a whiff of desperation anyway. He is past his best and will hardly provide an answer to that lack of pace.

Plenty for Hodgson to ponder here. Will he take all three of his 30-somethings in Steven Gerrard, Frank Lampard and Michael Carrick? That is unlikely.

Gerrard will go as captain so the lack of a quality holding midfield player may leave 35-year-old Lampard at risk. He had a quiet game on his 103rd England appearance against Chile but Carrick is currently out for six weeks and Gerrard has been suffering a slight hip problem in recent times.

So who else is making a case? Not Tom Cleverley, who was average again against Germany. The suspicion grows that his status and reputation is elevated by playing his club football at Manchester United because there are serious doubts about his international pedigree.

Jack Wilshere is not at his best and suffers injury but he will go if fit. Everton's Ross Barkley has great potential but is still developing at this level. The teenager's best position is also just behind the striker and with Wayne Rooney a candidate for that role he may find himself pushed out of the squad - but this is a very gifted youngster and he could yet offer a persuasive case.

Liverpool's Jordan Henderson is another Hodgson likes but will he do enough to stand out from the crowd?

On the flanks Hodgson will at least be heartened by the emergence of Tottenham's Andros Townsend and is clearly taken with Southampton's Adam Lallana. The reliable James Milner looks certain to go as a workhorse but Hodgson will also hope Arsenal pair Theo Walcott and Alex Oxlade-Chamberlain can return to form and stake claims.

Manchester United's Ashley Young has done little to suggest he should be worthy of serious consideration.

Wayne Rooney, as ever, holds the key. He has been outstanding for Manchester United and, while he was quiet against Chile and Germany, will carry England's attacking burden in Brazil, either as a striker or playing just off the striker.

Liverpool's Daniel Sturridge has moved to the front of the queue to link-up with Rooney but has yet to show his club form for England. He needs to rein in a tendency to over-elaborate which is easier for international defenders to deal with than domestic opposition. Sturridge, however, has real quality.

Southampton's Rickie Lambert is still in the shake up while Jermain Defoe will hope to get enough games and goals at Spurs to keep Hodgson's attention.

Manchester United's Danny Welbeck will almost certainly be on the plane to Brazil if all stays fair with him. He gives Hodgson goals as a striker as well as an adaptability to play on the left flank - and actually looks a more likely scorer for country than club.

Hodgson has one more game before he names England's provisional 30-man squad for Brazil. Two defeats and two lifeless Wembley performances have provided him with plenty of food for thought.