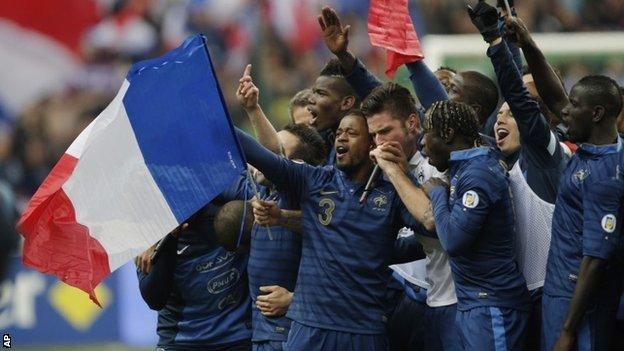 France can make a good impression on next year's World Cup after scraping through with a play-off victory over Ukraine, says manager Didier Deschamps.

It is the first time a European team has qualified by overturning a 2-0 first-leg deficit as France won 3-0.

"It's the magic of football - four days ago we were very bad but the players responded well," said Deschamps.

"It was important for French football to be in Brazil. When we've got the ingredients we can do great things."

France have won all 16 games when Karim Benzema has scored

Two goals by Liverpool defender Mamadou Sakho either side of a controversial Karim Benzema goal earned France a thrilling victory at the Stade de France in Paris over a Ukraine side who were reduced to 10 men after 47 minutes.

And it meant Les Bleus failed to repeat their World Cup heartache of 20 years ago when they lost a final qualifier to Bulgaria, denying them a place at the 1994 finals.

The 1998 champions and 2006 runners-up received plenty of criticism after a poor display in Kiev last week.

But they were a side transformed in front of their own supporters.

Real Madrid's Benzema appeared to have a legitimate goal ruled out after half an hour when the flag was raised for offside despite being level. Four minutes later, though, the 25-year-old forward scored from close range when he looked in advance of the Ukraine defence.

"We showed we are a great team," Benzema said." If we play like this we can go far [at the World Cup]."

France finished second behind World Cup holders Spain in their qualifying group, but have now qualified for the last five global tournaments.

Sakho, 23, added: "I am happy. The team spirit was there. My first goal gave us hope and we were all together in the dressing room, you need that collective spirit.

"We also have to acknowledge the fans who cheered us on. All the French public were behind the team."