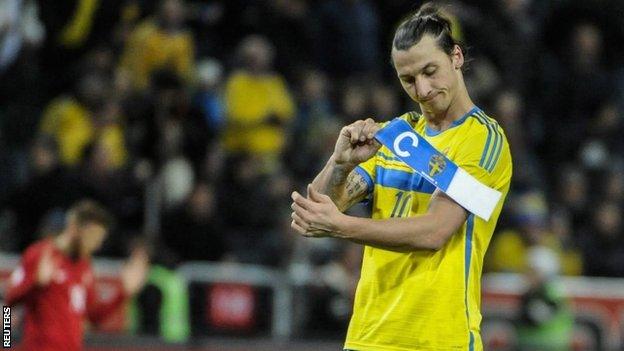 Sweden captain Zlatan Ibrahimovic says the World Cup is not worth watching without him after their play-off loss.

The Paris St-Germain striker scored twice against Portugal on Tuesday but Cristiano Ronaldo's hat-trick took his side through 4-2 on aggregate.

Ibrahimovic, 32, said: "It was probably the last attempt to reach the World Cup with the national team for me.

"A World Cup without me is nothing to watch so it is not worthwhile to wait for the World Cup."

The play-off between Sweden and Portugal, who had both finished second in their qualifying groups, had been billed as a showdown between Ibrahimovic and Ronaldo - two of the best players in the world.

At the age of 32, Sweden skipper Zlatan Ibrahimovic may not have another opportunity to play in a World Cup finals.

And the tournament would represent a nadir in the Paris St-Germain striker's career. He has never scored at a finals having made two substitute appearances in 2002 and three starts in 2006.

They ended up scoring all six goals between them as Portugal won 4-2 on aggregate.

Former Inter Milan forward Ibrahimovic, who has played in two World Cups, scored eight times in qualifying, including the play-offs, and assisted another six goals - having a hand in 14 out of Sweden's 21 goals.

He told Uefa's website: "Why did we lose? To be honest, they were better than us. We should be proud. We couldn't have done better than we did.

"Of course, we could look back at our mistakes, but these things happen. They punished our mistakes. After making it 2-1 it felt like we were on a roll, our hopes grew, but unfortunately they made it 2-2 soon afterwards."

Real Madrid forward Ronaldo, who has scored 34 goals in 24 games this season for club and country, said: "I just did my job, as I have been doing lately. I always try to give my best - that is always my goal."

He is now Portugal's joint-top scorer, along with retired former Paris St-Germain striker Pauleta on 47.

"It was not a priority for me to break Pauleta's record," the 28-year-old said. "I knew Portugal needed me and I stuck to the task at hand. Now we have some time to rest and to do our best for our clubs before starting to think about the World Cup finals."