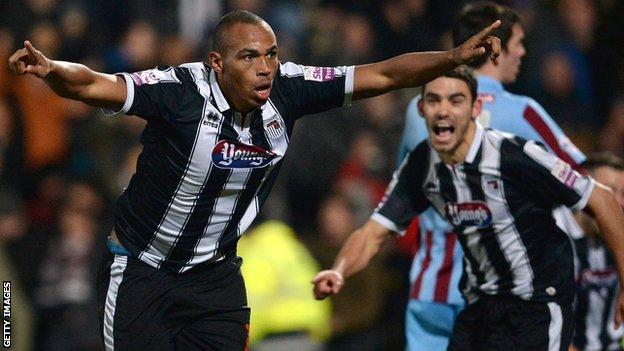 McDonald scored the winning goal as the Mariners knocked out local rivals Scunthorpe with a 2-1 victory at Glanford Park on Tuesday.

Paul Hurst's side are currently fourth in the table.

"We have to look to be consistent in the league now and focus on getting into League Two," McDonald told BBC Radio Humberside.

"We're all enjoying this win but all we're thinking about now is beating Barnet [in the Conference Premier] on Saturday."

McDonald's goal was his first for the club since joining from Port Vale in the summer and sets up a second-round tie at home to Northampton Town.

He admitted his goal nearly came at a cost as he had to restrain himself from going into the visiting fans to celebrate.

"It's a great place to have got my first goal and it came at an important time," he said.

"It was a crazy feeling. I wanted to go into the crowd but I was already on a yellow so I had to stop myself."