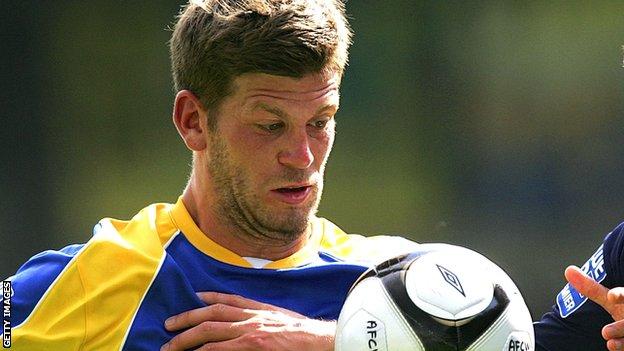 Boreham Wood midfielder Luke Garrard was frustrated after having a penalty saved in their FA Cup first round replay defeat by Carlisle.

He could have put the non-league side 2-0 up before half-time, having already given them the lead from the spot.

Carlisle went through to the second round 2-1 after scoring two late goals.

"I've no excuses in fairness. I run the academy at the club and I say to the boys 'you can't miss from 12 yards'," Garrard told BBC London 94.9.

"We went in 1-0 at half-time but it should have been 2-0. I went from hero to zero within three minutes."

Conference South side Boreham Wood had, who drew 0-0 with the Cumbrians in the original tie, went ahead just before the half-hour mark in Tuesday's replay.

On-loan forward Austin Lipman was brought down in the box and former AFC Wimbledon man Garrard hammered the resulting penalty into the top right corner past Carlisle keeper Greg Fleming.

The performance we put on is a glowing reference for the Conference South. We have taken a League One side to a game on their home patch and forced them into a late goal

Garrard then had a second chance from 12 yards just minutes later when Conor Townsend's challenge on David Moli resulted in another penalty decision, but Fleming dived to his left to save the 28-year-old's effort.

"I got good height on the first one and thought if I did the same with the second he wouldn't save it," Garrard said.

"We did penalty kicks on Thursday and the manager [Ian Allinson] said 'once you take it, don't change your mind'.

"I must have rapped them in the top corner for or five times in training. It is massively frustrating.

The League One side set up a second round tie at home to Brentford after Lee Miller and Mark Beck scored late on.

Despite the defeat, Garrard felt Boreham Wood did enough at Brunton Park to make it through to the second round.

"We had a 10-minute debrief and the boys are absolutely gutted. It was hard to take they got an equaliser in the 82nd minute and went and won it in the 94th. It is a massive blow as we felt we did our homework on them," he said.

"We stopped their supply initially and had some of the better chances in the second half, but were not able to get the result."

Garrard added: "The performance we put on is a glowing reference for the Conference South. We had a standing ovation from their supporters, who booed their own team off.

"Hopefully we can take our form in the FA Cup into the league. The shift the boys put in was second to none."