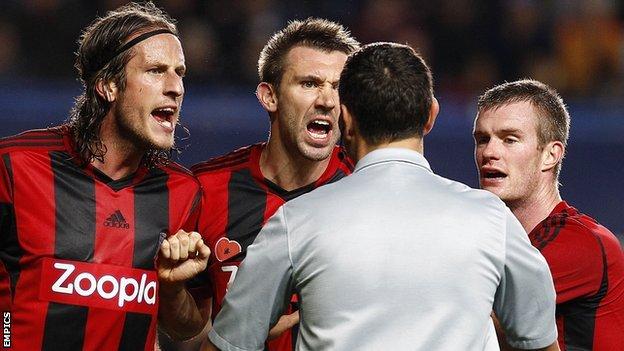 West Brom have received an apology from referees' chief Mike Riley for the award of Chelsea's injury-time penalty at Stamford Bridge earlier this month.

Albion were 2-1 up when referee Andre Marriner controversially awarded a spot kick four minutes into added time for Steven Reid's challenge on Ramires.

Eden Hazard scored to earn a 2-2 draw, denying the Baggies a first league win at Stamford Bridge since 1978.

"He obviously feels it was the wrong decision. It doesn't get us any more points but it's nice of Mike to phone."

"I have watched it two or three times and it was a clear penalty," Mourinho told BBC Sport. "The referee made many mistakes during the game but that was not a mistake."

Riley's call to the club is the second apology Albion have received inside a month, with former World Cup final referee Howard Webb having also said sorry for not awarding Clarke's side a penalty during the goalless draw with Stoke City at the Britannia Stadium last month.

The club have sent a letter to the Premier League and referees' body PGMOL highlighting four penalty decisions that have gone against them in the opening 11 games of the season.

"If there is technology that can be used to help referees make difficult decisions, which is what they have to do, then let's look at it and see what we can come up with."

Albion sit 10th in the Premier League table ahead of Monday night's home derby against neighbours Aston Villa, who are level on points and just a place behind.