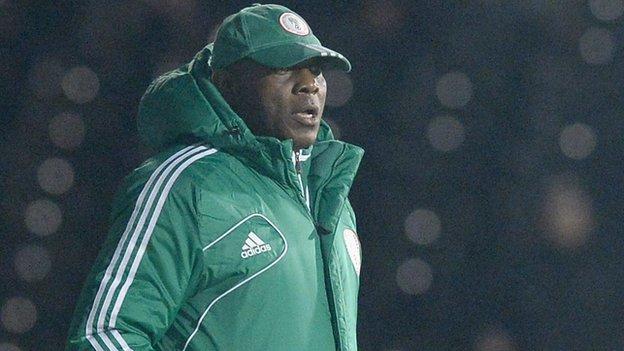 Nigeria coach Stephen Keshi says he is not disappointed to have been left off the shortlist for the Fifa coach of the year award.

Keshi has not been named among the 10 candidates for the honour, despite leading an inexperienced side to the Africa Cup of Nations title in South Africa at the start of 2013

He was the first black African coach to have won the trophy in 21 years, and he has since also qualified Nigeria for next year's World Cup finals.

The former Nigeria captain told BBC Sport: "It's really not a problem for me that I was not included or considered at all by Fifa.

"I would be disappointed if I had failed to win the Nations Cup or take this great country to the World Cup in Brazil.

Nothing will ever erase what we've done. The award snub does not affect me

"That I was able to achieve this significant success with my loyal staff and dedicated players is all that matters."

The shortlist is dominated by coaches working in Europe and African journalists have strongly criticised Fifa for the omission of Keshi from the list of coaches of the year.

There have been suggestions in some quarters that Keshi's achievement in winning the Nations Cup has not been given the value it should by those who select the shortlist.

"I understand why some journalists are disappointed and I appreciate their love and concerns," Keshi said.

"We've achieved great things this year and I feel honoured to have managed these talented players.

"Nothing will ever erase what we've done. The award snub does not affect me."

Keshi is one of only two men who has won the Nations Cup as a player and a coach - the other being Egypt's Mahmoud El-Gohary.

In 1994 Keshi captained the Super Eagles to their second continental success in Tunisia and 19 years later he was in charge of the west African side as they won the trophy for the third time in their history in South Africa.

He also led Togo to their first - and to date only - appearance at the World Cup finals, but was sacked a few months before Germany 2006.

Last weekend Keshi and his African champions secured their place at next year's World Cup with a 2-0 victory over Ethiopia in the second leg of a qualifying play-off, giving them a 4-1 aggregate win.

He is the only African coach to have qualified two nations to the tournament.

Meanwhile, Keshi praised his players for coping with the effects of jetlag and fatigue to hold Italy to a 2-2 draw in an entertaining friendly at Fulham's Craven Cottage in London on Monday.

"Only 48 hours after playing a World Cup qualifying match and flying right away here, my players did good," Keshi said.

"Without sleeping, and we didn't get to do any training before this game. I'm happy."