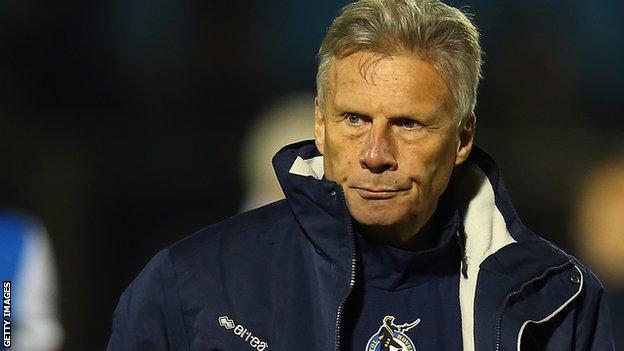 Bristol Rovers boss John Ward believes their 3-2 FA Cup first-round replay win at York was another successful test for his developing side.

The Pirates raced into a 3-0 lead with goals from John-Joe O'Toole, Oliver Norburn and Chris Beardsley, but had to hold on after two Wes Fletcher strikes.

We'll get a nice crowd for the second round and if we can get through that then he [the chairman] wants the big bonus as well.

"I've seen another side to them as we've had to dig in at the end."

The result continues the recent good form of Rovers who are undefeated since they lost 2-1 at Accrington towards the end of October.

Striker Beardsley scored his second goal in four games since joining on loan from Preston and Ward was pleased that the 29-year-old got his reward for being the lone front man.

"I'm delighted for Chris particularly because the shape puts him a little bit lonely at the top end of the pitch," he added.

"It kind of suits John-Joe to get forward from that midfield position as he's got a bit of insurance.

"I don't mind how the goals come and to get three away from home is always good.

"We'll get a nice crowd for the second round and if we can get through that then he [the chairman] wants the big bonus as well."

Rovers will now face League One side Crawley Town in the second round on Saturday, 7 December.